Bitcoin is trending lower still, moving inside a descending channel on its 4-hour chart and finding resistance at the middle. This coincides with the 38.2% Fibonacci retracement level that might keep gains in check.

A higher pullback could last until the 50% Fib which is closer to the channel resistance. The 100 SMA also lines up with the top of the channel to add to its strength as a ceiling.

This moving average is below the longer-term 200 SMA to confirm that the path of least resistance is to the downside. In other words, the selloff is more likely to resume than to reverse. The gap between the two moving averages is widening after all, reflecting strengthening bearish pressure.

Stochastic is also pointing down from overbought levels to signal a return in bearish pressure. RSI has some room to climb, though, so the correction could stay in play for a while. Resistance is located around $9,000-10,000 as this lines up with a former support zone as well. 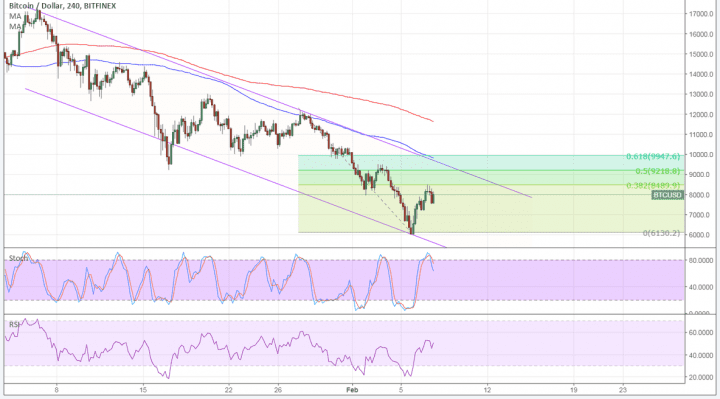 The US dollar has drawn some support in recent trading sessions as risk aversion is also starting to favor this lower-yielding currency. Still, US equities managed to hold on to some of their gains in the bounce after the earlier declines.

Bitcoin is also drawing support from news that US financial regulators appear to be in agreement about increased oversight in the cryptocurrency industry without hampering development. This appears to have soothed investors’ fears somewhat but it remains to be seen if it’s a strong enough catalyst that could allow the longer-term uptrend to resume.

Meanwhile, there are no major reports due from the US today so it could be all about sentiment in the financial markets from here. Take note that bitcoin appears to be tracking higher-yielding assets and taking advantage of risk appetite, which is a different dynamic than in the past when it rallies on risk-off days.