Bitcoin is still trending lower but in correction mode, currently testing an area of interest more visible on the 1-hour chart. However, there seems to be enough momentum for a higher pullback to the channel resistance at $9000.

An even larger correction could last until the $10,000 area, which also lines up with a former support region. The 100 SMA is below the longer-term 200 SMA, though, so the path of least resistance is to the downside. This means that the nearby resistance levels are more likely to hold than to break, allowing the selloff to resume at some point.

Then again, bitcoin has broken past the 100 SMA to reflect a pickup in bullish pressure, and a break past the 200 SMA dynamic inflection point could draw more bulls back in. Stochastic is pulling higher so price could follow suit, but RSI is on the move down to show that selling pressure is still present. 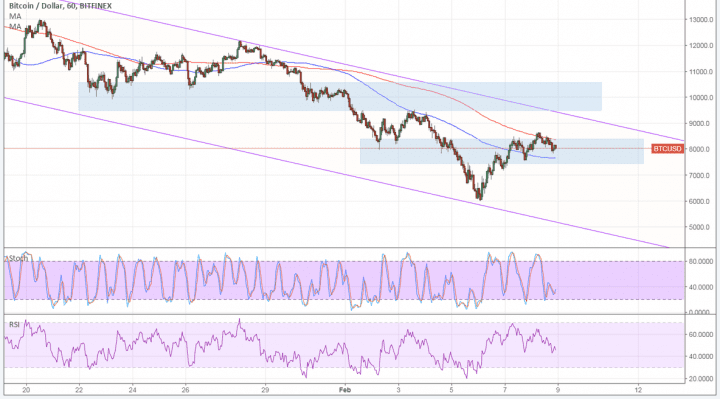 The stock market staged another sharp selloff that weighed on riskier assets including bitcoin. Keep in mind that market dynamics are different these days, wherein bitcoin is tracking traditional markets like stocks and commodities as opposed to taking some of the outflows in the past.

Meanwhile, the dollar is drawing support thanks to its safe-haven appeal. Data from the US economy has mostly been stronger than expected and supportive of more Fed tightening. It also helps that tax reform could keep business and consumer activity afloat in the coming months.

However, the prospect of yet another government shutdown is discouraging traders from piling on long dollar positions. After all, this could put a bit of a dent on economic activity and investor sentiment, especially if the scenario comes up again in the near future.

As for bitcoin itself, the recent Senate hearing on how regulators should increase oversight without hampering development could prove positive for the cryptocurrency. This could also allow other governments to be more lenient in their regulation, reviving volume and activity in the market.