Bitcoin looks ready for more upside but has several upside barriers to clear. Price is currently testing the top of its descending channel pattern, which lines up with the 100 SMA dynamic inflection point.

This moving average is below the longer-term 200 SMA to signal that the path of least resistance is to the downside. In other words, the selloff is more likely to resume than to reverse. The longer-term 200 SMA lines up with another descending trend line around $10,000, which is an area of interest.

Stochastic is on the move down but seems to be pulling higher to signal increased bullish pressure. RSI is moving sideways but is near overbought levels, which means that buyers could take it easy from here. In that case, bitcoin could head back down to the channel support or the swing low. 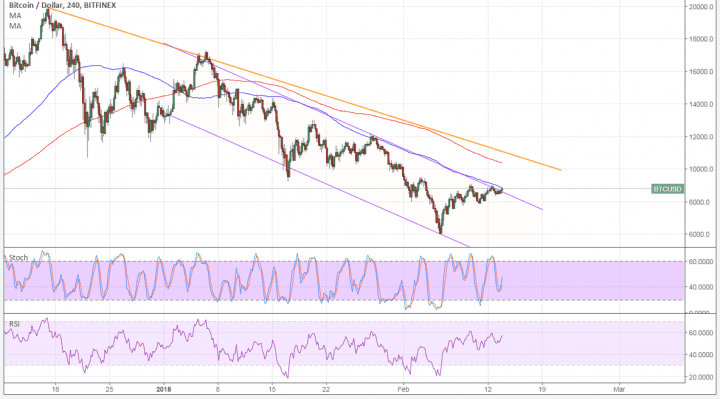 Higher-yielding assets like stocks and commodities struggled to extend their gains in recent sessions, and bitcoin has followed suit. However it looks like the momentum is fading and profit-taking could take place soon.

At the same time, the US is set to release its CPI and retail sales reports. Strong data could reinforce Fed rate hike expectations, which would shore up the dollar and weigh on riskier assets. After all, tightening could weigh on business investment and consumer spending. On the other hand, weak data could extend BTCUSD gains as it would be positive for risk and negative for the dollar.

As for bitcoin itself, easing fears about regulation are being seen as one of the factors propping prices higher. Apart from the lack of headlines on industry crackdowns, the recent US Senate hearing encouraging developments in the sector has been positive news for the industry. Other countries are expected to take a similar stance, which could draw investors back in the game.