BTCUSD is attempting to start its uptrend as price is now testing the neckline of its inverse head and shoulders pattern. An upside break could send price higher by around $4,000 or the same height as the formation.

The 100 SMA has crossed above the longer-term 200 SMA to confirm that the path of least resistance is to the upside or that bullish momentum is strengthening. These moving averages are holding as dynamic support as well.

Stochastic is heading south to indicate that sellers have the upper hand, but the oscillator is approaching oversold territory. This would reflect exhaustion among sellers and draw buyers back in. RSI, however, has room to fall, so bears could stay in control for a bit longer. 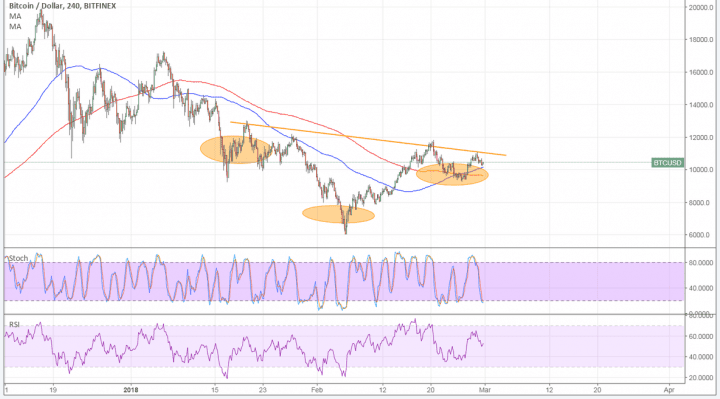 The US dollar enjoyed another boost in recent trading sessions as risk aversion is picking up. Data from the US economy has actually been weak so there are doubts that the Fed could keep up its tightening pace, but the prospect of higher interest rates still weighed on stocks, commodities, and to some extent cryptocurrencies.

At the same time, the positive sentiment for bitcoin is fading as the SEC is reportedly issuing dozens of subpoenas and information requests to technology companies and advisers in the industry. Earlier this month, Chairman Clayton pledged increased scrutiny on companies who seek to “capitalize on the perceived promise” of an increased stock value.

The agency also charged former cryptocurrency exchange BitFunder and its founder with fraud last week, so the spotlight is back on regulation. Further allegations and more charges could lead to another mass liquidation for bitcoin holders on doubts that the industry could carry on with this kind of oversight.

Still, it’s worth noting that the US Senate hearing a few weeks back has encouraged developments in the industry even with regulation. News of the acquisition of Poloniex by Circle could also pave the way for an expanded market reach.