Bitcoin is still in an uptrend after bouncing off support on its ascending channel on the 4-hour time frame. The climb appears to be slowing as technical indicators show overdone conditions, but price could still aim for the Fib extension levels from here.

The 100 SMA has crossed above the longer-term 200 SMA to signal that the path of least resistance is to the upside. This means that the uptrend is more likely to continue than to reverse. The 100 SMA is at the channel support to add to its strength as a floor as well.

However, stochastic is already dipping into overbought territory to reflect weakening bullish pressure. RSI looks ready to head south and take bitcoin price along with it even without hitting overbought levels. A break below $10,000 or the swing low at $9,300 could be enough to confirm a reversal from the uptrend. 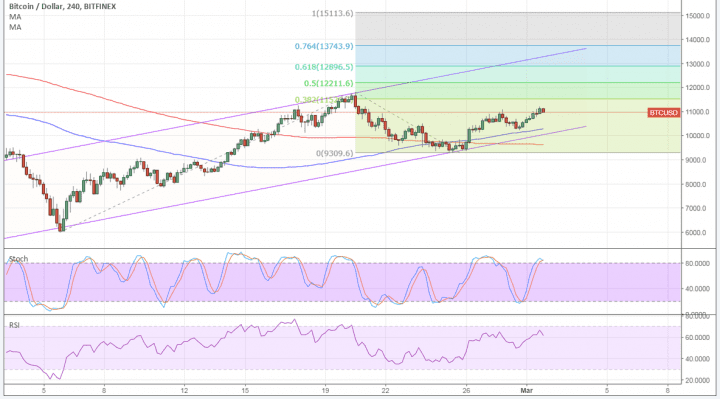 Bitcoin has managed to stay resilient even as risk aversion returned to the markets, suggesting another shift in the dynamic. Recall that bitcoin previously took advantage of geopolitical risks before tracking stocks and commodities more recently. Now it seems that the cryptocurrency is back to its safe-haven demand.

The dollar also sold off in recent trading mostly due to fears of a trade war stemming from Trump’s plans to impose higher tariffs on steel and aluminum imports to protect US producers. This could have widespread repercussions on businesses all over the globe, and it doesn’t help that tightening prospects are also likely to limit activity.

Meanwhile, bitcoin has taken some hits on news that SEC is stepping up its regulation but it has managed to stay afloat in anticipation of more industry developments.