Bitcoin recently broke below the double top neckline on its 4-hour time frame to confirm that a downtrend is underway. Price has bounced off the $8,500 level a couple of times, though, creating a small double bottom pattern.

This could mean that a small rally might take place, possibly a correction from the latest selloff. Bitcoin is already bouncing off the former neckline at $9,800 so the selloff might resume from here. This area is also close to the 200 SMA dynamic inflection point, which might add an extra layer of resistance.

Stochastic is moving up but also dipping into overbought territory to signal exhaustion among buyers. If sellers take over, price could fall back to the swing low or the Fibonacci extension levels.

RSI, however, is still on the move up to signal that there’s some buying pressure left. The 100 SMA is also above the longer-term 200 SMA to indicate that the path of least resistance is to the upside. A break past these moving averages could draw more buyers in. 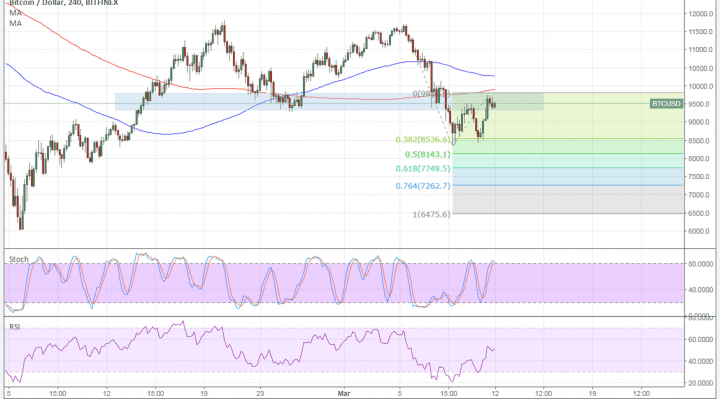 Bitcoin has undergone a lot of selling pressure in the previous week, following the SEC’s increased oversight on cryptocurrency exchanges and Japan’s shutdown of small crypto platforms. The selloff was also worsened by the hack on Binance, leading investors to question the security of ICOs and their platforms.

However, dollar weakness also came into play as risk appetite returned to the markets. Bitcoin appears to be taking advantage of this market environment once more, as opposed to previously being able to benefit from geopolitical risk.

This time, dollar action could still steal the show as the US will release its CPI and retail sales figures. Weak data could dampen tightening expectations, which might be positive for higher-yielders.