Bitcoin is starting to trend higher on its 1-hour time frame and has just bounced off support. There might be enough bullish momentum for a test of the channel resistance at the $10,000 major psychological mark.

Stochastic is on the move up to show that buying pressure is present, but the oscillator is nearing overbought conditions. Turning lower could draw bears back in and lead to another test of support. RSI has more room to climb, though, so bitcoin still has a chance at testing the resistance. 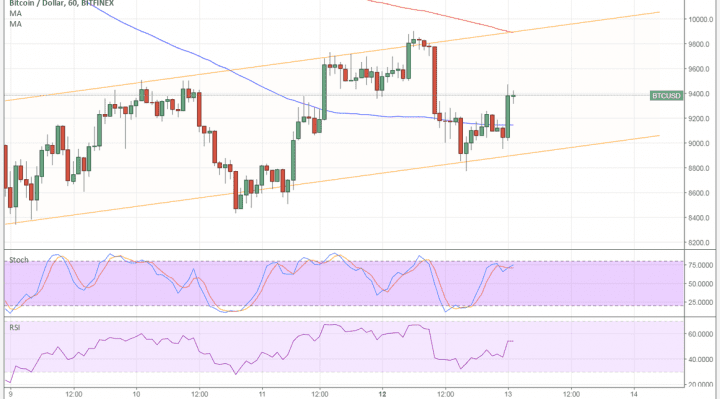 The dollar has weakened against some of its peers on account of upcoming CPI releases, as traders predict that weak results could come out and weigh on Fed tightening expectations. This might lead to more gains for bitcoin against the dollar, especially if risk appetite stays in play.

However, bitcoin is also under pressure due to several headlines, starting from the SEC’s increased oversight, the shutdown of two Japanese exchanges, and the hacking of Binance. More negative updates could mean further liquidation of cryptocurrency holdings, particularly of bitcoin.

A return in geopolitical risk, particularly from fears of a trade war, could still prop bitcoin higher. So far, risk-taking is peeking back in after Trump tempered his talk on tariffs, conceding that some nations like Mexico and Canada could be subject to exemptions. However, more hostility from other partners like the euro zone could still keep risk-off flows present. Trump’s meeting with North Korean leader Kim Jong-Un could also lead to changes in risk sentiment that might impact bitcoin.