Bitcoin recently broke above the neckline of its inverse head and shoulders pattern, signaling that bulls are ready to charge. Note that this chart pattern spans $6,000 to $11,000 so the resulting uptrend could be of the same height.

The 100 SMA has crossed above the longer-term 200 SMA to confirm that the path of least resistance is to the upside. In other words, the rally is more likely to resume than to reverse. The gap between the moving averages is also widening to reflect stronger bullish momentum. The 100 SMA is close to the neckline, adding to its strength as potential support in the event of a quick pullback.

Stochastic is on the move up to show that buyers still have the upper hand. However, the oscillator is nearing overbought conditions to signal that profit-taking could happen soon. RSI is also treading higher but nearing overbought levels as well. 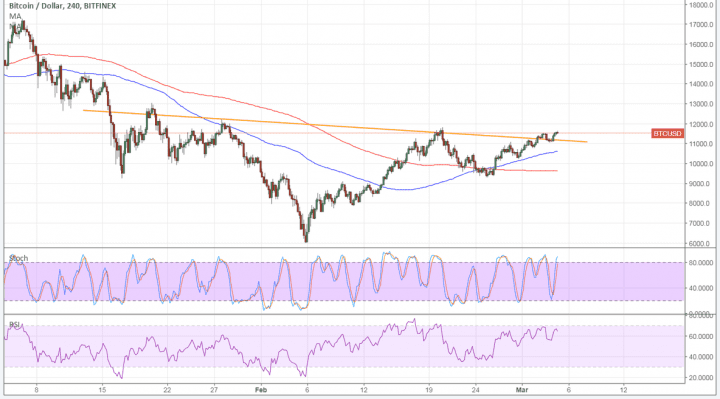 The US dollar has been on weak footing since the middle of the previous week when Trump announced his plans to impose higher tariffs on steel and aluminum imports. This could lead to weak demand for commodities globally, which would be negative for businesses and risk sentiment. To top it off, tightening prospects are also keeping risk appetite at bay.

However, it looks like bitcoin is taking advantage of this market phenomenon, contrary to the earlier dynamic when it trailed stocks and commodities. Looking ahead, heightened geopolitical risk could prove positive for bitcoin. Another factor keeping geopolitical risk in play is the EU draft agreement on post-Brexit conditions.

Then again, the US has the NFP report due on Friday and this could make or break the dollar’s slide. Stronger than expected results could reinforce tightening expectations, which might drive the dollar higher. On the other hand, weak data could ease tightening jitters and allow higher-yielders to keep advancing.