Bitcoin is still trending higher and is inside an ascending channel on its 1-hour chart. Price is currently testing the channel support and might be due for a bounce back to the top.

The 100 SMA is above the longer-term 200 SMA to indicate that the path of least resistance is to the upside. This means that the uptrend is more likely to resume than to reverse. Also, the 100 SMA lines up with the channel support around $11,300 to add to its strength as a floor.

Stochastic is already indicating oversold conditions, which suggests that sellers are exhausted and willing to let buyers take over. RSI has some room to head south, though, so bitcoin could still dip a little lower before bulls hop back in.

A break below support around the $11,000 mark, on the other hand, could lead to a reversal. The 200 SMA dynamic inflection point could be the line in the sand for this uptrend. A bounce could take bitcoin back up to the $11,800 channel resistance or the $12,000 major area of interest. 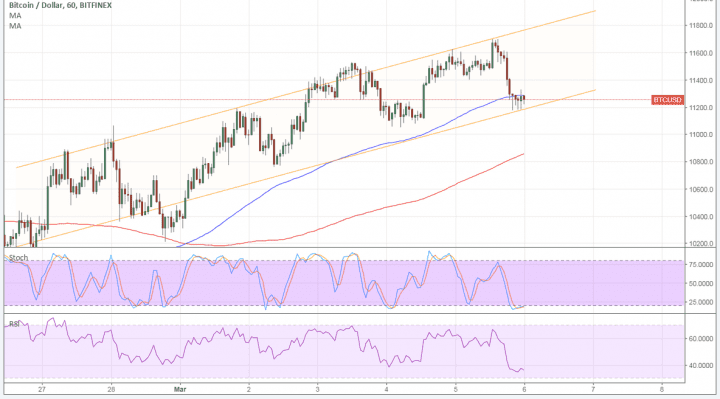 Stocks and commodities staged a strong recovery in recent trading as risk sentiment improved. Interestingly enough, bitcoin has been unable to join these rallies lately as it appears to be taking advantage of risk-off flows on geopolitical risks again.

Fears of a trade war appear to be fading as Trump has faced a lot of opposition from politicians and businessmen on his plans to impose higher tariffs on steel and aluminum. Apart from potentially antagonizing its trade partners, it could also mean lower supplies of raw materials for U.S. businesses.

The ISM non-manufacturing PMI beat expectations with a smaller than expected decline, but the prices and employment components posted reductions that might weigh on overall inflation and the NFP reading. A disappointing result could dampen tightening expectations, which would be negative for USD and positive for higher-yielders, so it’s impact on BTCUSD could be hard to determine.