Bitcoin seems to be having trouble sustaining its rally as price is forming a double top reversal pattern on its 4-hour time frame. Price has yet to test the neckline and break below it to confirm a selloff, though.

The 100 SMA is above the longer-term 200 SMA to signal that the path of least resistance is to the upside. In other words, the rally is more likely to resume than to reverse. Also, the 100 SMA is holding as dynamic support at the moment and the 200 SMA could also serve as a floor near the neckline.

Stochastic is already indicating oversold conditions or that sellers need to take a break. RSI is on the move down to show that there’s some bearish pressure left but is also nearing oversold levels.

Bitcoin price could still revisit the latest highs near the $12,000 mark and attempt to break higher to sustain the uptrend. But if price breaks below the double top neckline at $9,500, a selloff of around $2,000 or the same height as the chart formation could ensue. 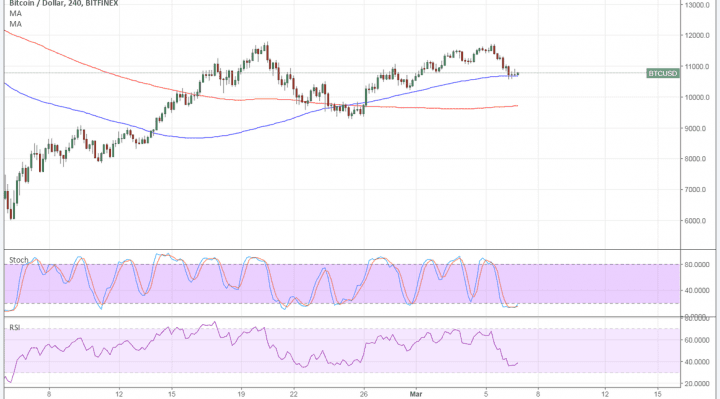 The US dollar regained some ground versus higher-yielding assets and currencies recently as risk aversion returned on trade war jitters. Although some US officials tried to reassure the general public with their remarks, the announcement of top economic adviser Cohn’s resignation hit risk appetite hard.

Bitcoin price appears to be moving in line with stocks and commodities once more and reeling from risk-off moves. The focus could turn to US fundamentals, though, as the NFP release is approaching. Another 200K gain in hiring is eyed for February, but a weaker than expected read could lead to dollar weakness.

On the other hand, stronger than expected results could spur tightening expectations, which has also proven bearish for higher-yielders, including bitcoin. Of course there are specific factors that could directly affect bitcoin, one of which is the expected launch of a bitcoin ETF from Coinbase.