Bitcoin is trending lower and has just recently bounced off the top of its ascending channel. Price is also starting to break below the 200 SMA dynamic support to reflect a pickup in selling pressure.

The 100 SMA is above the longer-term 200 SMA for now, though, so the path of least resistance is still to the upside. This means that there’s still a chance for the uptrend to resume.

Stochastic is heading south to show that sellers have the upper hand for now, but the oscillator is also dipping into oversold levels to reflect exhaustion. RSI has a bit more room to head south so bitcoin could follow suit until the mid-channel area of interest.

Also note that bitcoin broke below the neckline of its double top pattern to signal that bearish momentum is picking up. This chart pattern spans around $2,000 so the resulting selloff could be of the same height. 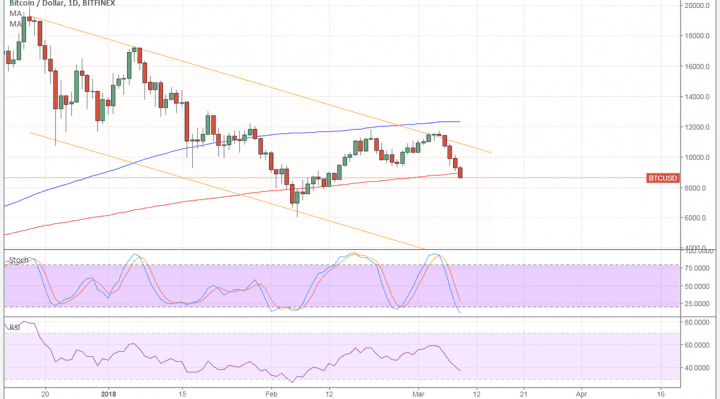 Bitcoin has been hit on all sides recently, from increased oversight by the SEC to reports of compromised accounts in Hong Kong exchanges. Earlier in the week, the SEC announced that it would require digital asset exchanges to register with the agency since these are considered securities.

According to the statement:

“If a platform offers trading of digital assets that are securities and operates as an ‘exchange,’ as defined by the federal securities laws, then the platform must register with the SEC as a national securities exchange or be exempt from registration.”

“The SEC staff has concerns that many online trading platforms appear to investors as SEC-registered and regulated marketplaces when they are not. Many platforms refer to themselves as “exchanges,” which can give the misimpression to investors that they are regulated or meet the regulatory standards of a national securities exchange.”

Soon after, Japan’s Financial Services Agency suspended operations at two  small exchanges, Bit Station and FSHO, for a month. According to the regulator, a manager at Bit Station used customers’ bitcoins for personal purposes, based on their investigation.