Bitcoin has been on a strong climb ever since breaking above a descending channel resistance and bullish continuation pattern. Price is stalling at an area of interest around the $1150 area right, as this level previously held as support and could keep gains in check.

Stochastic is indicating overbought conditions, which suggests that sellers could regain control of bitcoin and push it back to near-term support areas at $1080 then at $1050. RSI is on the move up to indicate that there’s some buying pressure left but the indicator is also nearing overbought levels. Once it turns lower, a correction from the climb could take place.

The 100 SMA is below the longer-term 200 SMA on the 4-hour time frame so the path of least resistance for bitcoin is to the downside. However, the gap between the two seems ready to narrow and allow an upward crossover to happen soon. If so, more buyers could join the fold and contribute additional bullish pressure on bitcoin. 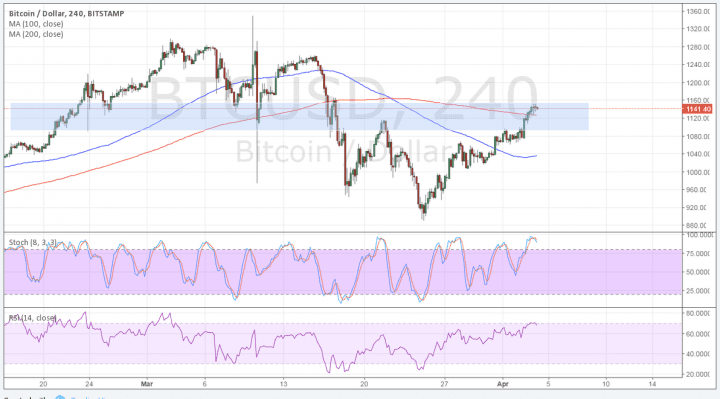 Reports that a number of exchanges and bitcoin nodes are rejecting Bitcoin Unlimited, which is the newer version of the software that could potentially render old bitcoin invalid, is keeping price afloat in the near-term. This signals that BU cannot overtake the consensus and that the cryptocurrency can proceed with the hard fork without losing much stability or giving rise to incompatibilities. Also, the news that Japan has recognized bitcoin as a legal form of payment as of April 1 is also providing support for bitcoin.

Meanwhile, in global financial markets, the presence of uncertainty in the US and Europe is contributing to bitcoin gains as traders seek higher returns on alternative investments instead of putting funds in traditional securities. The lack of volatility in the forex market as traders are waiting for bigger events such as the Brexit negotiations or French elections to pan out is also drawing investors to bitcoin instead.

Moving forward, a couple of events could throw the spotlight back on the US dollar and Fed rate hikes. For one, there’s the FOMC meeting minutes due midweek that could shed more light on how policymakers are feeling towards two more rate hikes this year. Recent Fed testimonies have already supported this outlook so the lack of hawkishness or signs of caution could spur a selloff for the dollar. Either way, hawkish expectations have long been priced in so there’s a strong chance of disappointment and profit-taking. On Friday, the NFP report is due and this could significantly influence rate hike odds as well.