Bitcoin has formed higher lows and found resistance around its record highs at 2900, creating an ascending triangle consolidation pattern on its 1-hour chart. Price is currently awaiting the outcome of the upgrade to SegWit2x to see if gets enough network consensus approval to avoid a hard fork to different versions.

The resistance seems to be holding so far, but bitcoin bulls also appear to be pushing higher. The 100 SMA has crossed above the longer-term 200 SMA to confirm that the path of least resistance is to the upside. In that case, bitcoin could make a rally of around 700, which is the same height as the chart pattern.

However, stochastic is pointing down to reflect the presence of bearish pressure. This could spur a quick test of the triangle support around 2700 and the 200 SMA dynamic support. RSI is also on its way down so bitcoin might follow suit. A break below support could lead to a drop of 700 as well or a test of the triangle lows at 2200. 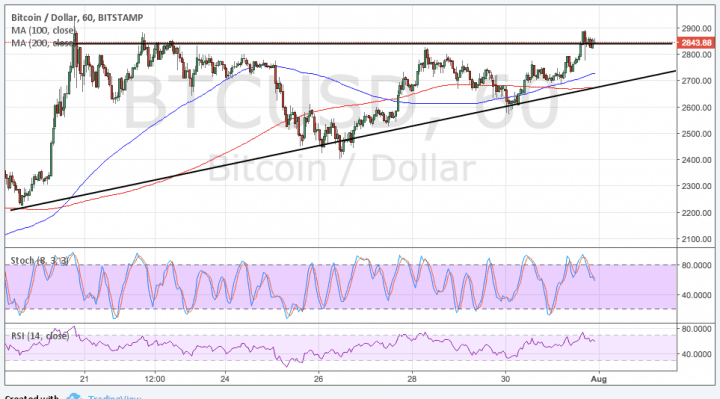 The US dollar is in a weak spot owing to the shakeup in the White House after Trump recently fired Priebus as his chief of staff then Scaramucci as his communications director. This casts doubt on the administration’s ability to push its fiscal reform agenda forward, possibly weighing on US growth prospects and tax cut odds for companies.

The US core PCE price index, along with personal spending and income reports, are lined up today. The US NFP due on Friday could also set the direction for the dollar since this would impact Fed rate hike expectations for September or December.

A smooth transition for bitcoin to SegWit2x with strong network acceptance could eliminate hard fork concerns for a while, easing incompatibility issues to clone versions like Bitcoin Cash. On the other hand, a fork to different versions could be negative for the cryptocurrency and lead to a longer-term selloff.