Bitcoin could be poised for new all-time highs again as price failed to break below a head and shoulders pattern. Price is also forming a rising channel on its 1-hour time frame and has room to climb to the resistance at the $4500-4600 area.

The 100 SMA is safely above the longer-term 200 SMA to confirm that the path of least resistance is to the upside. In other words, the rally is more likely to continue than to reverse. The gap between the moving averages is widening to reflect strengthening bullish pressure that might even be enough to take it past the channel resistance. 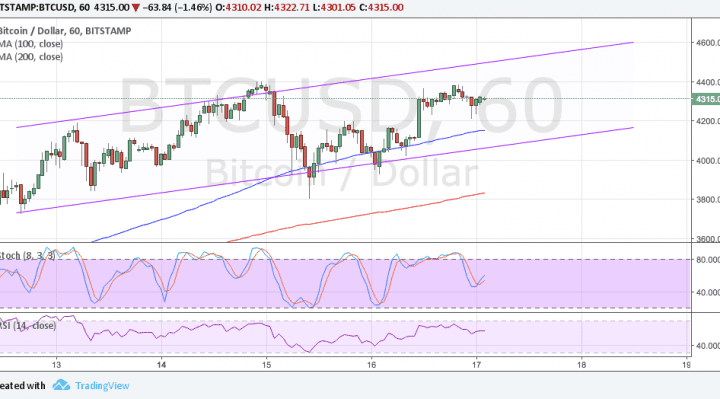 Dollar weakness has been pinpointed as the main cause of the rally in bitcoin price recently as the political fallout in Washington is dampening hopes of seeing fiscal reform within the year. Members of Trump’s business committee advising him on strategy have quit in a vote of no confidence after the President failed to address the events in Charlottesville properly.

Apart from that, the lack of resolve from the FOMC minutes when it comes to the balance sheet runoff also drove dollar bulls away. Traders had been expecting more details or an actual announcement on when the unwinding might start but it looks like officials still have a number of concerns in mind. Among these are the downbeat inflation trends and the likelihood that it could stay below the Fed’s 2% target for quite some time.

Bitcoin could continue to take advantage of these political uncertainties as the cryptocurrency tends to gain in times of risk aversion or weak stock market performance while traders search for higher returns in non-traditional markets.