Bitcoin has been trending higher but has recently bounced off the resistance at the top of its ascending channel visible on short-term time frames. Price could be due for a correction to the channel support around $4100 before resuming its climb.

The 100 SMA is safely above the longer-term 200 SMA to confirm that the path of least resistance is to the upside. In other words, the rally is more likely to continue than to reverse. The gap is still sufficiently wide so a new crossover isn’t likely to happen anytime soon. Also, the 100 SMA appears to have held as support already as it coincides with an area of interest.

Stochastic is pulling up to reflect a return in bullish momentum. RSI, on the other hand, has room to head lower so there may be some bearish pressure enough to spur a test of support. A break below the bottom of the channel could lead to a move to the next area of interest around $4000 or the 200 SMA dynamic inflection point. 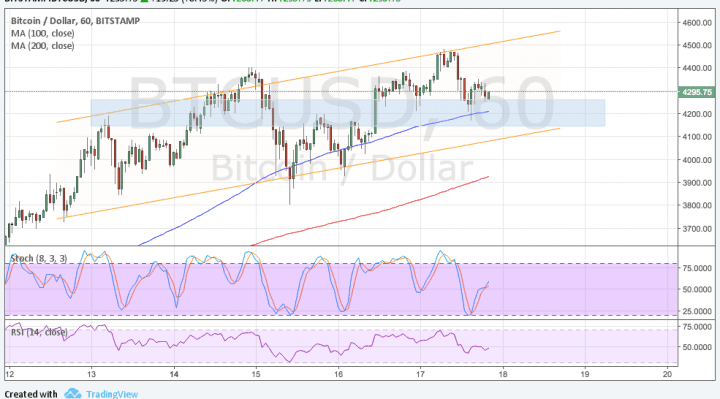 Bitcoin remains strongly supported by market factors, especially since traders are hesitant to put their funds in US assets given the political uncertainties. There have been rumors of resignation among top government officials following Trump’s handling of the Charlottesville violence while other world leaders are also distancing themselves from the US President.

With that, traders could simply be waiting for another opportunity to buy up bitcoin at cheaper levels. A bounce off the channel support could draw enough bullish momentum for setting another record high past $4500, with sustained upside pressure likely taking bitcoin up to the next psychological ceiling at $5000.

The cryptocurrency has outpaced its rivals due to the network upgrade that allowed it to handle much more transactions than usual. Continued geopolitical risk such as the one stemming from the terror attack in Barcelona could also draw more investors towards bitcoin and out of traditional markets like stocks and commodities.