Bitcoin was unable to break past the resistance around $2935 during its latest test and is back to the bottom of its short-term consolidation pattern. Another bounce off this near-term support could lead to a test of resistance and perhaps a break higher, but a break below support could open the door for a test of the longer-term range support around $1850.

The 100 SMA is crossing above the longer-term 200 SMA on the 4-hour time frame to signal a pickup in buying pressure. Note that the chart formation is around $700 in height so an upside break could lead to a rally of the same height. Similarly, a move below support could lead to a drop of $700. The moving averages are close to the bottom of the triangle and the mid-range area of interest, adding an extra layer of support.

Stochastic is on the move down to show that bearish pressure is still in play. RSI is also turning lower so bitcoin might follow suit. 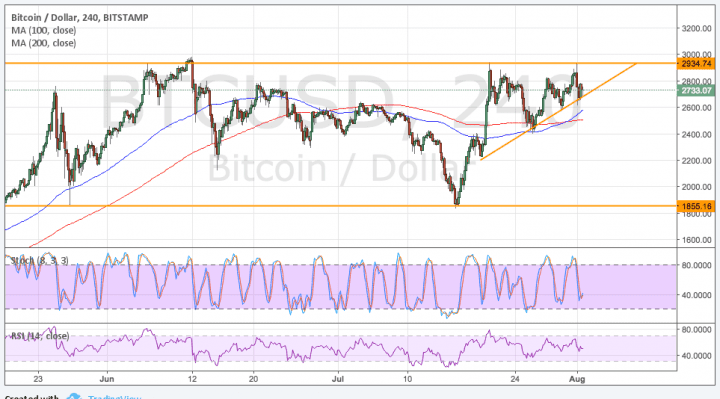 Bitcoin has officially split into two versions in a hard fork scenario on August 1. This means that a clone version of the software is in place even after the main network shifted to SegWit2x. Only a few exchanges are accepting the clone version so incompatibility issues could still arise even as some market watchers remain confident that the original version would gain stronger acceptance later on.

In any case, the bitcoin network is still able to handle more transactions from now on so there may be a number of factors that could keep it supported. Any new issues popping up from the existence of a different version, however, could lead to downside moves.

Meanwhile, the dollar has regained some support after the tension in the White House seemed to subside. Data has been in line with expectations and leading jobs indicators could take center stage from here. Stronger than expected figures could fuel upside NFP expectations, which would keep Fed rate hike expectations in play for September or December.