Bitcoin recently broke below an ascending trend line, signaling a reversal from the previous uptrend. Price found support at the $3600 area and has since pulled back to the broken trend line, which lines up with the 61.8% Fibonacci retracement level.

The 100 SMA is below the longer-term 200 SMA so the path of least resistance is to the downside. In other words, the selloff is more likely to resume than to reverse. Price could fall back to the swing low or lower from here.

However, stochastic already reached oversold levels and is starting to turn higher to indicate a return in buying pressure. RSI has room to head lower so bitcoin might follow suit. 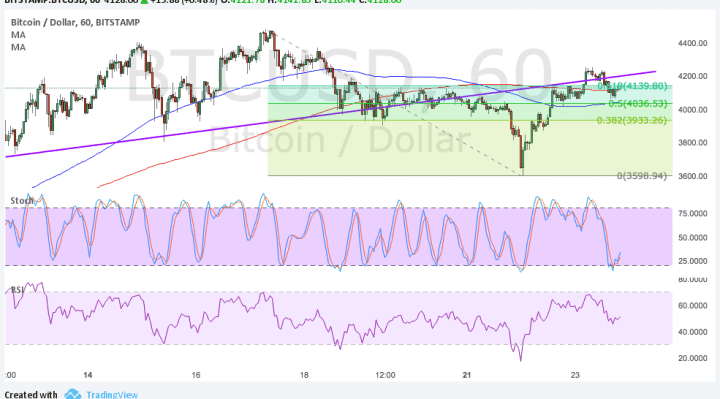 Bitcoin is losing traction from its previous rally as rival bitcoin cash continues to gain mining power. It has been reported that bitcoin cash can generate new blocks in 1-2 minutes faster than the original version, drawing more interest from both miners and investors.

Recall that hard fork incompatibility concerns were kept under wraps as only few exchanges accepted bitcoin cash. However, the pickup in market interest and the advantages over the core version are leading to stronger demand for the newer version, likely yielding strong competition moving forward. In that case, incompatibility issues could stay in play and keep dampening demand for bitcoin.

Meanwhile, the dollar is also under selling pressure as political rifts in Washington continue, following the fallout from Charlottesville. Trump has also threatened to shut down the US government if lawmakers don’t give him funds to build the wall along the border of Mexico. Although Senate majority leader McConnell assured that they are working together with Trump, market watchers can’t help but speculate that the fiscal reform agenda will stay in the back seat for much longer.

Looking ahead, Fed head Yellen’s Jackson Hole speech could be a big catalyst for the dollar across the board and would likely have a strong impact on market sentiment. A continuation of risk-off flows could be positive for bitcoin if traders seek higher returns outside of stocks and commodities, but it could also keep the dollar supported.