Bitcoin is currently attempting to break past its showing several bullish signals, indicating that new all-time highs are in the cards. Price has already closed past the range resistance around $4400  and technical indicators are suggesting that the rally could be sustained.

The 100 SMA is above the longer-term 200 SMA so the path of least resistance is to the upside. The gap also seems to be widening to signal strengthening bullish momentum.

Stochastic is pointing up to indicate that buying pressure is in play while RSI is heading north as well, which means that bitcoin price could follow suit. However, both oscillators are nearing overbought levels already so buyers might need to take a break soon and allow sellers to take over. In that case, bitcoin can still head back to the range support at $3845.

Price has also recently broken past the resistance of a short-term descending channel, also a signal that further gains are likely. 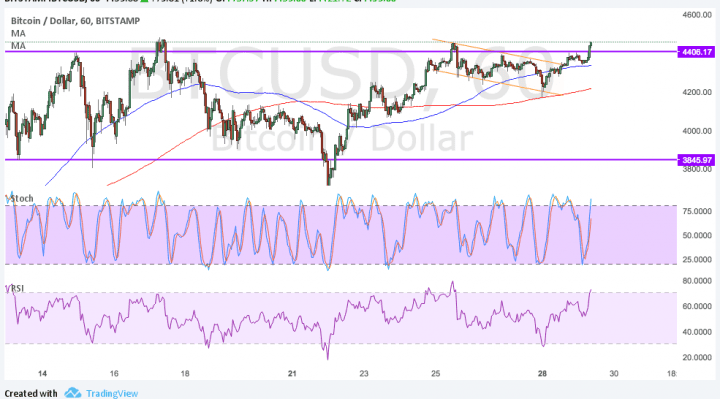 The pickup in geopolitical risk following North Korea’s decision to fire a missile across Japan has spurred demand for cryptocurrencies as these assets typically offer higher returns even in times of risk aversion. Global stocks and commodity prices have dipped as traders anticipate potential disruptions to economic activity, so it’s understandable how investors are seeking to adjust their holdings.

At the same time, the dollar is under pressure from these reports as Pyongyang has repeatedly threatened to launch a missile strike on the US territory of Guam. They did say that they’d wait and see what the US government’s next moves would be but also warned that the joint military exercises of South Korea and the US are being viewed as an act of provocation.

A hostile response from Trump could elevate the risks and lead to more inflows to bitcoin and away from US equities as traders anticipate an actual strike on the country.