Bitcoin continues to tread sideways, still deciding whether to make a move higher or to retreat to the nearby support levels. A double top could form at the 1-hour time frame and signal a longer-term drop if it tests the area of interest at $2400.

This level lines up with a former resistance and is the middle of the cryptocurrency’s range against the dollar. A break below the double top neckline could lead to a drop of around $450-500 or the same height as the reversal formation, taking bitcoin to the $2000 psychological level next.

The 100 SMA is still above the longer-term 200 SMA so the path of least resistance is to the upside. However, the moving averages have been oscillating for some time to signal that consolidation conditions could carry on. Price has yet to break below the 200 SMA dynamic inflection point before clearing the path to the $2400 support.

Stochastic is pointing up to signal that there’s some bullish momentum left. A break past the $2850-2900 area could test the all-time highs or even lead to the creation of new ones. This oscillator is approaching the overbought level, though, so buyers might need to take a break and let sellers take the upper hand. RSI is barely offering directional clues since it continues to tread sideways. 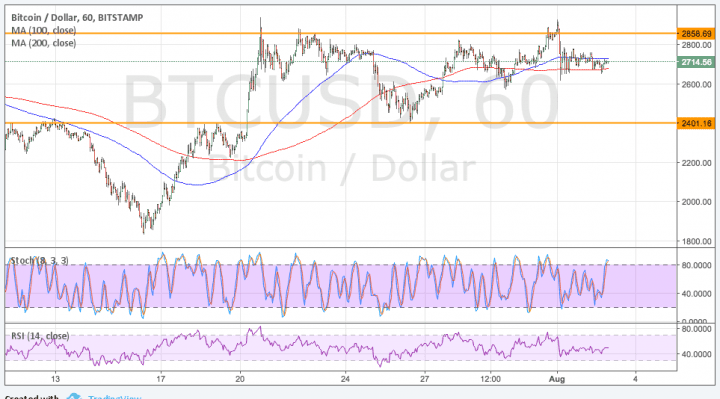 Now that bitcoin has officially split into two versions and market players are still waiting to see if incompatibility issues arise, the attention shifts to the US dollar first. The economy will report its July NFP figure on Friday and this could set the tone for future Fed policy.

In their speeches yesterday, a handful of Fed officials maintained their bias to proceed with gradual tightening but warned that soft inflation should give policymakers reason to pause. Also, Bullard recommended that balance sheet unwinding should start this fall but shared that FOMC members have yet to decide on how much to trim the holdings.

A higher than expected NFP result could reinforce September rate hike hopes and lead to strong gains for the dollar versus bitcoin. On the other hand, a downbeat reading could mean gains for BTCUSD.