Bitcoin is starting to go for new all-time highs again, buoyed by risk aversion and dollar weakness. Price bounced off the bottom of its ascending channel and the Fib extension levels indicate how high it might climb.

The 100 SMA is still above the longer-term 200 SMA so the path of least resistance is to the upside. Price could climb until the 76.4% extension near the top of the channel and the $5000 level. In addition, the 100 SMA lines up with the channel support, adding to its strength as a floor in the event of a pullback.

Stochastic is already indicating overbought conditions and is turning lower to show a pickup in selling momentum. RSI is on the move up but is also in the overbought area to reflect weakening bullish pressure. If bulls stay in control, though, bitcoin could have a chance at breaking past the channel resistance and going for the full extension at the $5285. 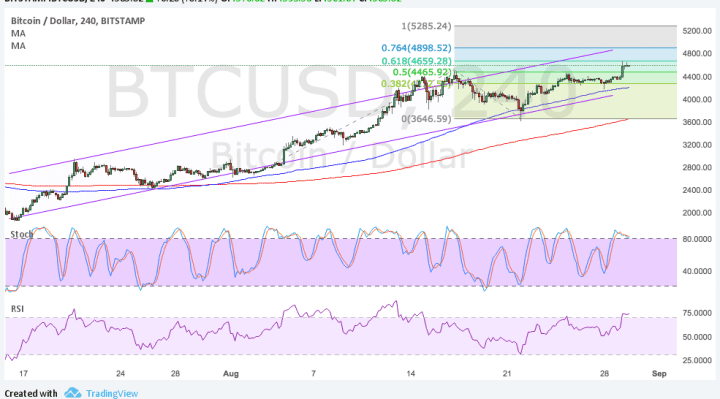 Bitcoin demand ticked higher as geopolitical risks returned when North Korea launched another missile. At the same time, the US dollar is being dragged lower by a potential missile strike on Guam, weakening Fed rate hike forecasts, and the projected impact of Hurricane Harvey on Q3 growth.

The upcoming NFP release could set the tone for Fed tightening expectations for the rest of the year as a very strong reading could revive September hike speculations while a downbeat figure could douse hopes even for a December hike.

As for bitcoin itself, rival bitcoin cash has tumbled to fresh 11-day lows since miners are still finding it more profitable to mine bitcoin than bitcoin cash. This could further ease incompatibility concerns even as the activation of SegWit is completed. Nonetheless, it’s still worth noting that bitcoin cash is up about 170% since the start of the month as it has been reported that new blocks can be generated at 1-2 minutes faster than the original core version.