Bitcoin recently broke past the top of an ascending channel on its short-term time frame to rally to new highs. Price is stalling around the $4650 level, though, and might be due for a deeper pullback before heading any further north.

Applying the Fibonacci retracement tool on the latest swing low and high shows that the 50% level lines up with the broken channel resistance, which might now hold as support. This is also line with the 100 SMA dynamic support while the 61.8% retracement level is closer to the 200 SMA dynamic inflection point.

Speaking of moving averages, the 100 SMA is above the longer-term 200 SMA to confirm that the path of least resistance is to the upside. This means that the rally is more likely to resume than to reverse. If any of the Fib levels hold as support, price could test the record highs once more or create new ones.

Stochastic is indicating overbought conditions on this time frame so buyers might need to book profits and let sellers take over from here. RSI is treading sideways halfway through its way down, but this oscillator appears to be pulling up to signal a return in buying momentum. 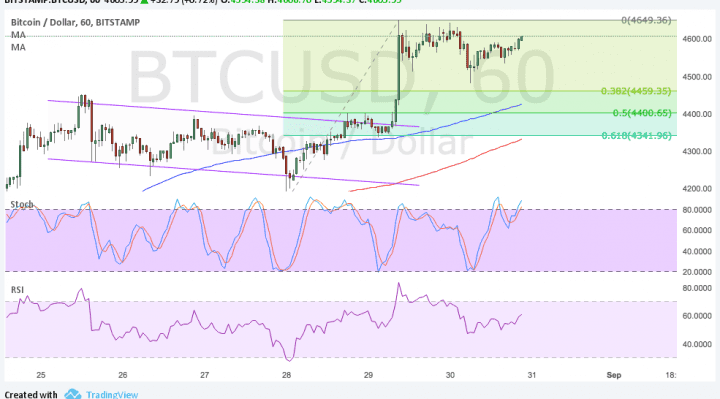 Bitcoin remains supported by the presence of geopolitical risk as cryptocurrencies tend to attract investor interest due to their higher returns relative to stocks and commodities during these cases. Fears of a North Korean nuclear missile strike appear to have faded for now but markets still seem to be on edge.

The US dollar recently surged across the board after the GDP reading was upgraded from 2.6% to 3.0% and President Trump threw the attention back on tax reform during his speech in Springfield, MO. The ADP jobs report, which is considered a preview of the official NFP release, turned out stronger than expected for August and also included an upward revision in the July report.

If the NFP report does turn out stronger than expected, Fed rate hike expectations could rise again and lead to gains for the dollar against bitcoin. A disappointing read, on the other hand, could allow bitcoin to take better advantage of dollar weakness.