Bitcoin price seems to be running out of momentum to sustain its climb, so it might be looking to start a reversal instead. A head and shoulders pattern is starting to form on the 1-hour time frame but price has yet to complete its right shoulder.

From there, a test of the neckline could be underway before confirming the downtrend. The neckline is located at $2700, which is close to the 200 SMA dynamic support. Speaking of moving averages, the 100 SMA is still above the 200 SMA so the path of least resistance is to the upside.

Stochastic is turning lower to signal that bears are regaining the upper hand and could allow the $2800 level to keep gains in check, completing the creation of the head and shoulders pattern. RSI is also turning lower to indicate a pickup in selling pressure. 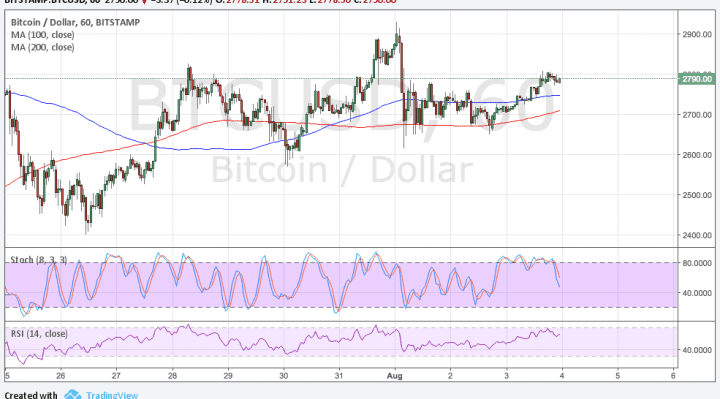 Bitcoin recently had a hard fork but this didn’t trigger much of a selloff as many expected because there have been no major issues so far. Besides, other industry updates pertaining to bitcoin securities being more available has kept the cryptocurrency afloat.

The attention should shift to dollar movement from now as BTCUSD could be pushed around by the results of the US NFP report. This should set expectations for Fed tightening moves, namely the next interest rate hike and the balance sheet runoff.

Stronger than expected results could spur dollar demand if traders continue to price in September rate hike odds while weak data could lead to a rally for bitcoin if it takes advantage of the drop in the dollar. Keep in mind that the US is also dealing with tension in Washington after the shakeup in senior officials in the White House and the ongoing probe into the Russian intelligence information leak and their alleged interference in the 2016 elections.

More troubles for the Trump administration could mean more dollar weakness and a likely rebound in bitcoin price, provided that all goes well with the existence of two versions of the cryptocurrency.