Bitcoin was finally able to break past the $3000 barrier and create new record highs near the $3350 minor psychological mark. Before further gains are made, price might need to make a correction to the nearby areas of interest.

Price appears to be forming an ascending channel on its 1-hour time frame and could pull back to support around $2800. This is close to the 61.8% Fibonacci retracement level on the latest swing low and high, as well as the 200 SMA dynamic inflection point.

Speaking of moving averages, the 100 SMA is safely above the longer-term 200 SMA to confirm that the uptrend will carry on. The gap between the two moving averages is even widening to reflect stronger bullish momentum. The 100 SMA is closer to the 50% Fibonacci retracement just slightly below the $3000 mark and former resistance, which might act as support moving forward.

Stochastic is pointing down to show that sellers are on top of their game for now. RSI is also moving down so bitcoin could follow suit and continue its correction. When both oscillators hit oversold levels and turn higher, buying pressure could return and take bitcoin back up to the latest highs and beyond. 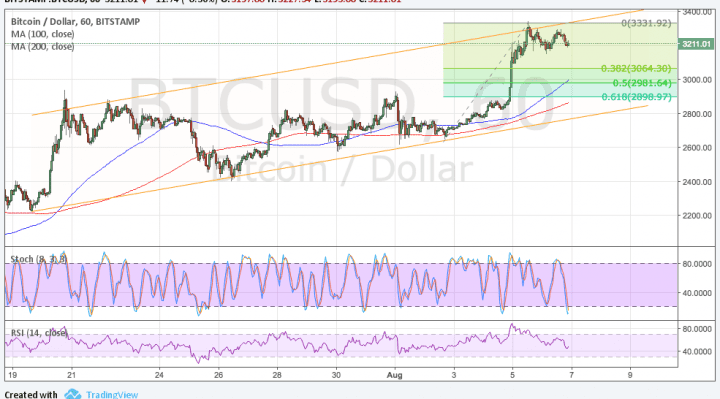 At the start of the month, bitcoin officially split into two versions of the software, leading some to worry about incompatibility issues as not all exchanges support both versions. However, the past few days have gone by without any major glitches or concerns being supported so traders took this as a signal to restore their long positions on the cryptocurrency.

Dollar demand could still put up a solid fight, though, as the latest NFP release printed a higher than expected increase in employment. This kept September hike expectations in play, along with projections that the central bank could start its balance sheet unwinding operations before the year ends, adding more upside pressure on the dollar’s value.

But with the recent technical breakout on bitcoin, demand for the cryptocurrency could prove to be much stronger. After all, most of bitcoin’s value is driven by demand and speculation so it’s likely that more bulls could join in on these rallies.