Bitcoin continues to advance after recently making a bullish breakout from the $3000 major psychological barrier. Price has formed higher lows and higher highs, creating a rising wedge formation on its 4-hour time frame.

Bitcoin is currently testing the resistance and might be due for a dip back to support if bulls need more reinforcement. The 100 SMA is above the longer-term 200 SMA on this time frame so the path of least resistance is to the upside. In other words, the uptrend is more likely to continue than to reverse.

However, stochastic seems to be running out of steam on its rise so it might turn lower and drag bitcoin along with it. RSI is indicating overbought conditions, which means that bulls need to take a break and let sellers take over in the meantime.

Support is located around the bottom of the wedge around $3000 and at the 100 SMA dynamic support around $2800. A larger correction could last until the 200 SMA dynamic inflection point closer to $2600 as a break below this level could confirm that a downtrend is underway. 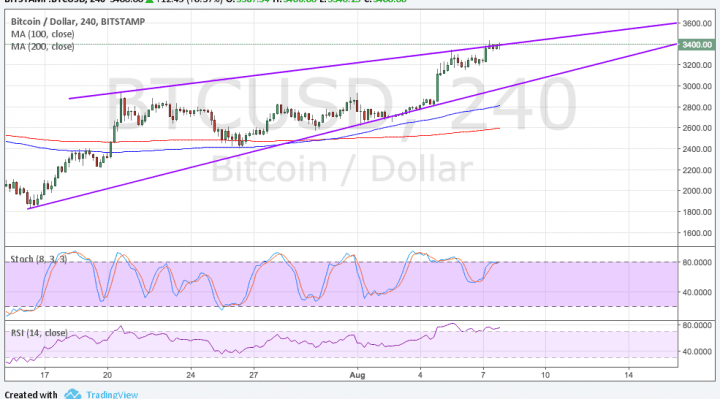 So far so good for bitcoin after its hard fork at the start of the month as there have been no major issues reported. This allowed investors to reestablish their long positions, especially since the network is able to handle much more transactions than before owing to the main version’s upgrade to SegWit2x.

Meanwhile, the dollar continues to be under a bit of selling pressure on doubts about the Fed interest rate hike in September. Although the July NFP report assured some dollar bulls that tightening could carry, many are speculating that another round of weak CPI figures could force the central bank to take a step back and probably delay the next hike to December.

Also, a couple of Fed officials said that the central bank should start its balance sheet runoff already since it won’t have a major impact on the markets. This could be another reason for the Fed to delay their next tightening move since unwinding would still put upside pressure on long-term rates and the yield curve.