Bitcoin looks prime for a correction as it tests the top of a potential ascending channel on its daily time frame. Applying the Fibonacci retracement tool on the latest swing low and high shows that the 38.2% level lines up with a former resistance area while the 61.8% level is closer to the channel support at $2400.

The 100 SMA is above the longer-term time frame on this daily chart so the path of least resistance is still to the upside. This means that the uptrend is more likely to continue than to reverse. The gap between the moving averages is widening to reflect stronger bullish momentum. The 100 SMA is close to the 61.8% Fib level as well, adding to its strength as potential support.

Stochastic is already indicating overbought conditions, which means that buyers are already exhausted and might be willing to let sellers take over from here. RSI has some room to head higher so there may be a few gains in the cards. Once both oscillators turn lower, selling pressure could strengthen and allow the correction to materialize. 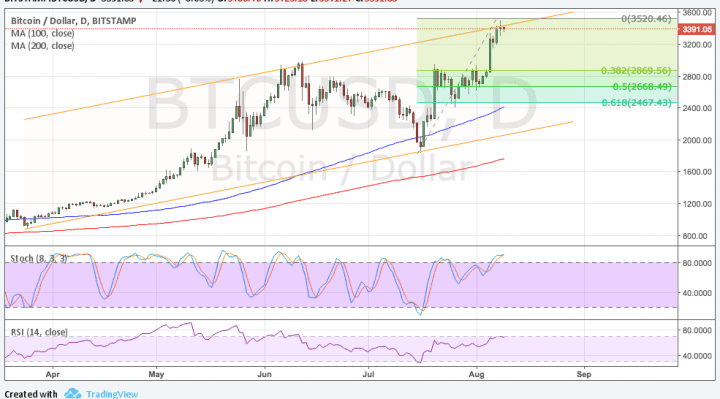 Bitcoin has drawn support from the upgrade at the start of the month since this allows the network to handle more transactions than usual. There have been no major issues surrounding the hard fork so far so investor confidence and demand for the cryptocurrency remain intact.

To top it off, the return in geopolitical risk coming from North Korea’s threats to strike Guam could also keep bitcoin afloat. Cryptocurrencies tend to absorb outflows from traditional higher-yielding assets like stocks and commodities while investors search for higher returns that are not subject to political risk.

Meanwhile, the dollar is putting up a good fight upon seeing upbeat data in the latest session. The JOLTS job openings figure hinted at higher prospects of employment down the line while the NFIB Small Business Index and IBD/TIPP index both showed strong business and consumer confidence, which would likely be positive for spending, investment, and overall growth.

The next risk for the dollar is the CPI release on Friday as policymakers remain wary of weak inflation. However, stronger than expected results could shore up September rate hike hopes and the dollar.