Bitcoin price recently broke above its ascending triangle resistance but bulls are struggling to push price higher from here. Technical indicators are showing mixed signals on the 1-hour time frame so far so corrections are still possible.

The 100 SMA just crossed above the longer-term 200 SMA to confirm that the path of least resistance is to the upside. However, it’s still too early to tell if this crossover would last and draw more buyers to the mix or if the indicators are still oscillating to suggest range-bound conditions.

RSI is turning lower from the overbought zone to show that sellers could regain control of price action and take BTCUSD back down, possibly for a correction to the broken triangle resistance around $1010-1015. The line in the sand for an uptrend pullback would be the moving averages, as a break below this dynamic support zone near $1000 could set off a longer-term selloff for bitcoin.

Stochastic is also heading south from the overbought area to hint at a return in selling pressure. Stronger bearish momentum could take bitcoin price back down to the next support at $950 or all the way down to the $900 major psychological level. 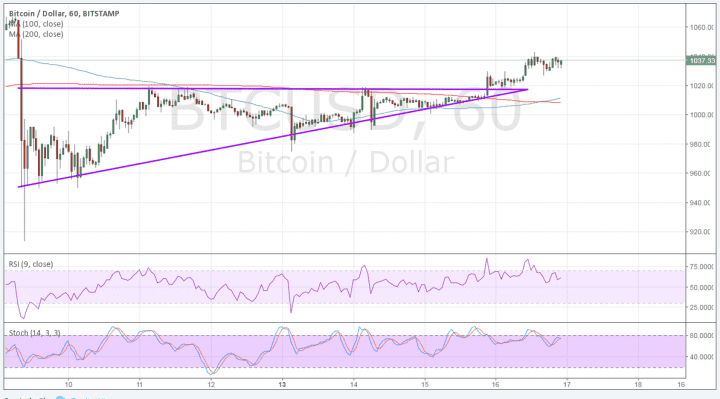 Investors are still generally cautious about putting funds back in bitcoin after all the goings-on in China. This is the largest bitcoin market in the world so anything that happens locally would have repercussions on global bitcoin activity. Earlier in the year, government authorities stepped up their efforts to curb bitcoin activity as part of their goal to reduce offshore investments and speculative yuan positioning.

This forced bitcoin to return a lot of its recent gains throughout January, although a rebound occurred when authorities seemed to ease up on their regulatory moves. However, bitcoin price tanked once more when a couple of major exchanges in the mainland were prompted to halt client withdrawals in compliance with ongoing investigations. This led traders to liquidate their holdings and be extra cautious when going long.

With that, liquidity has been significantly weighed down in the past few weeks so this low volatility environment could be the norm for bitcoin, unless any major industry updates pop up. So far, the industry has been showing positive developments in terms of bitcoin acceptance in the mainstream and on Wall Street. Aside from that, geopolitical risks in the West stemming from the Trump administration and the upcoming French elections are also keeping bitcoin supported. Foreseen financial troubles in Greece and Italy could also shore up demand for the cryptocurrency in the coming weeks.

On the flip side, factors that dampen bitcoin gains are that of Fed rate hike expectations for March which would boost dollar demand and anticipation for Trump’s tax reform plan which would encourage traders to put money in US assets instead. Of course there’s also the threat of Chinese regulation on bitcoin or penalties on clients that could further undo bitcoin gains.