Bitcoin is back on its uptrend, moving above an ascending trend line that connects the recent lows of price action. Price is actually testing the trend line support at the moment, which lines up with the 100 SMA and the 38.2% Fibonacci retracement level.

A bounce could take price back up to the swing high near $1070 while a break lower could spur a larger correction to the 61.8% Fib near the 200 SMA dynamic support. The 100 SMA is above the longer-term 200 SMA so the path of least resistance is to the upside, which means that the rally is more likely to resume than reverse.

Another major area of interest is located at the $1000 key psychological level, which has held as resistance in the past. This area could hold plenty of buy orders at this point so a bounce is likely to take place if that support area is tested. RSI is starting to head back up to show a return in buying pressure. Stochastic is still heading south, though, so there’s a decent amount of selling pressure left that could inspire a larger correction. 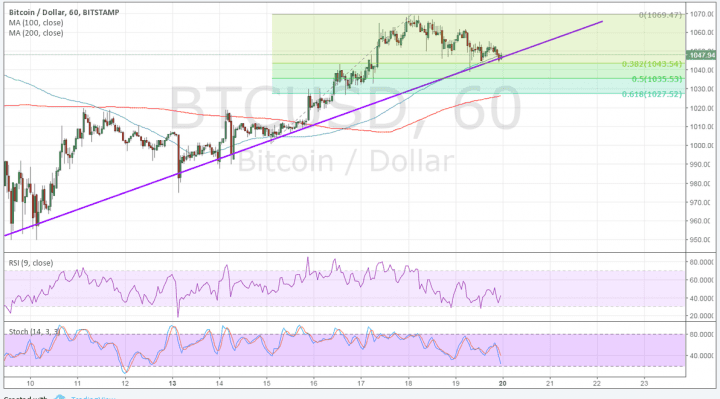 Momentum picked up for bitcoin as the US Senate recently confirmed the nomination of pro-bitcoin Mick Mulvaney as Trump’s budget director. This is on top of the positive strides being taken in the industry when it comes to being tapped by major financial institutions and government offices in the country.

Meanwhile, concerns about Chinese regulation on the bitcoin market have been subdued lately, although investors remain on edge. So far, there have been no major announcements in the mainland when it comes to money laundering investigations or potential penalties on exchanges and clients.

In other parts of the globe, revived debt concerns in Greece have drawn investors back to the cryptocurrency as they recalled the previous rally that capital controls in the debt-ridden nation caused. Failing to secure the next tranche of funds from its creditors could spur another cash crunch for Greece, which might then boost demand for bitcoin as it did in the past. To top it off, political shakeups in Italy could exacerbate the country’s shaky financial standing, which could also encourage European investors to put their money in bitcoin instead.

As for factors that could undo the rally, we’ve got a tentative announcement from Trump regarding tax reform that might lead to more gains for the dollar if corporate America isn’t disappointed with the news. This could further support growth and keep the Fed on track towards hiking interest rates, which would increase demand for US assets and therefore the US dollar. Still, the biggest mover might be China as any negative news that might impact liquidity in their market could do a number on bitcoin price.