Bitcoin was previously stuck inside a symmetrical triangle consolidation pattern before bullish pressure kicked in again. Price broke to the upside to signal that further gains are in the cards, but a pullback to the broken triangle resistance around $1190 is happening.

If this area, which lines up with the 100 SMA dynamic support, continues to keep losses in check, price could revisit the previous high past $1200 and onto the all-time highs closer to $1215. Stronger bullish pressure could take BTCUSD beyond that level onto new highs near $1300 and beyond.

The 100 SMA is above the 200 SMA on the 1-hour chart so the path of least resistance is to the upside. The gap is still sufficiently wide and there are no signs of a downward crossover just yet. However, RSI is on the move down to indicate that sellers are trying to regain control of price action. Stochastic is also making its way down from the overbought zone to show that buyers are taking a break and letting bears take over.

If bearish pressure is strong enough, bitcoin could head back below the triangle support and onto the next area of interest at the 200 SMA near $1140. A move below this level could take it down to the key $1000 level next. 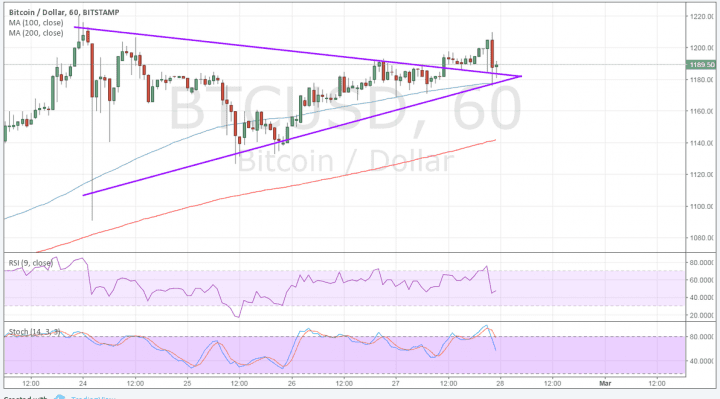 The US dollar had a bit of a setback to the benefit of BTCUSD when economic reports turned out mixed in the latest New York session. Headline durable goods orders beat expectations but core durable goods orders posted a surprise decline. Pending home sales also slumped as listings were fewer and homes are becoming less affordable due to rising prices and mortgage rates in anticipation of a Fed rate hike next month. The dollar also dipped when Trump admitted that they won’t announce tax reform plans until a suitable replacement for Obamacare is proposed.

Still, the US currency regained ground when the US President promised to share more details on infrastructure and security spending in his Tuesday speech in front of the joint sessions of Congress. Another rally in US equities could pull the dollar up against bitcoin price as well. Elsewhere in the world, particularly in Europe, geopolitical risks are still present and this continues to keep bitcoin supported.

In bitcoin industry news, traders are still holding out for the SEC approval of the bitcoin ETF COIN by the Winklevoss brothers. If this pushes through, market liquidity could increase significantly as more investors and institutions gain access to trading the cryptocurrency. Over in China, there still haven’t been any reports on regulations or penalties imposed on bitcoin trading firms or clients so investors are reviving their confidence to put money in the cryptocurrency.