Bitcoin has been consolidating on short-term time frames but zooming out to the daily chart confirms that further gains are possible. Price is moving above an ascending trend line and appears to be ready for a big bounce from here.

The 100 SMA is above the longer-term 200 SMA so the path of least resistance is to the upside. In addition, the 100 SMA has held as dynamic support with bitcoin price just bouncing off the $800 mark and trend line. Also, the gap between the two moving averages is widening so this means that bullish pressure is getting stronger.

If buyers are strong enough, they could push for a climb up to the latest highs close to the $1100 area. However, it would take a tremendous amount of reassurance that the Chinese government won’t be curbing bitcoin activity in the mainland to bring the cryptocurrency back up to that level.

For now, the next foreseeable resistance is at the $900 level, which held as a previous support zone. RSI is turning higher to show that buyers are trying to regain control of bitcoin price action while stochastic is indicating oversold conditions so sellers might book profits and take it easy from here. 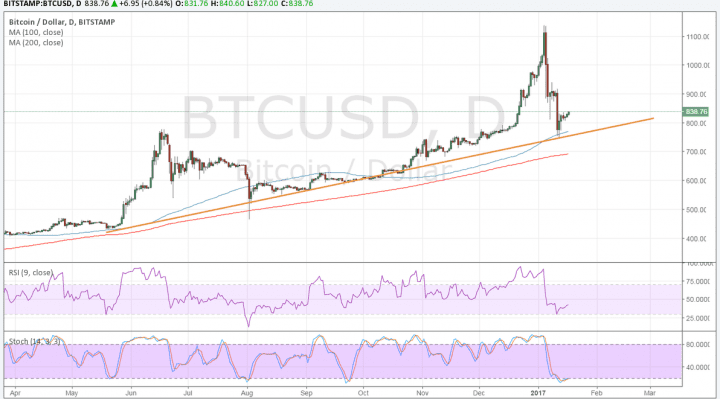 In fact, a bit of bullish divergence can be seen on stochastic as the oscillator made level lows while price had higher lows. This is another point in favor of further gains. However, if sellers refuse to let up, bitcoin price could break below the trend line support at $800 and go for a test of the 200 SMA dynamic support at $700 as the line in the sand for this long-term climb.

There are a couple of market catalysts worth watching this week if you’re trading bitcoin. One is the speech by U.K. Prime Minister Theresa May which might outline the future of the European region. Talks of a hard Brexit could spark enough risk aversion and draw investors to bitcoin for higher returns in the face of increased uncertainty.

Another big event is the Trump inauguration on January 20, which might prompt a lot of profit-taking for the dollar before the trading week comes to a close. His first press conference caused dollar bulls to unwind their positions so similar action could be seen before the inauguration, although another Trump rally similar to the post-election days could still be possible.

As always, any updates from the Chinese government’s crackdown on bitcoin activity would likely have a huge impact on the cryptocurrency. So far, no additional restrictions have been announced so a bit of calm was restored in the bitcoin market. Later in the week, the Chinese Q4 GDP reading is due and a downbeat result could send investors scurrying back to the cryptocurrency to hedge against yuan-denominated holdings or to pursue larger returns compared to local stock markets. Either way, stay on the lookout for higher than usual volatility in the days ahead.