Bitcoin is still safely inside its ascending channel formation on the 1-hour time frame but there are signs that bullish energy is fading. Price bounced off support but failed to show a strong rally up to the resistance as the longer-term area of interest around $900-925 appears to be holding really well.

Price seems to be gearing up for another test of the channel support at the moment, and the nearby 100 SMA could add to the strength of this floor. After all, the 100 SMA is above the longer-term 200 SMA so the path of least resistance is to the upside, which implies that the rally is more likely to continue than to reverse. Also, the gap between the moving averages is widening, reflecting stronger bullish momentum.

RSI is turning lower, though, and bitcoin could follow suit and possibly go for a break of the channel support. From there, BTCUSD could head south to the next area of interest closer to the 200 SMA or $840-850. Stochastic is also on the move down, which means that sellers are taking control of bitcoin action. 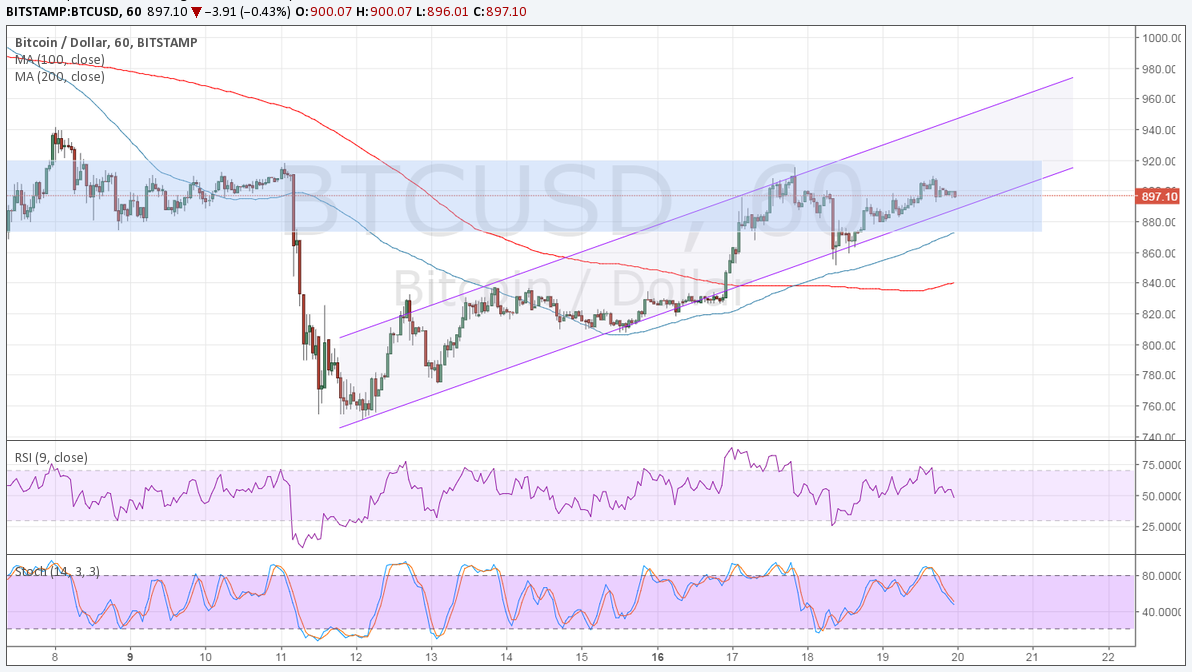 Recent market developments also imply that further weakness is in the cards for bitcoin. Following the investigations being conducted by Chinese officials on bitcoin exchanges and clients, a couple of leading platforms decided to opt out of offering leveraged products and margin accounts since authorities have judged that this could magnify the risks involved in bitcoin trading.

Other exchanges in the mainland might follow suit as they’d be hard-pressed to comply with regulation for fear of being slapped with worse penalties. Officials have also been stressing the need for anti-money laundering and KYC checks among these exchanges, threatening the anonymity of bitcoin transactions. All these could dampen demand for bitcoin in the mainland for the time being, thereby keeping a lid on volumes as China represents the largest market for the cryptocurrency.

Meanwhile, US traders are also showing signs of unease leading up to the Trump inauguration ceremony as his speech could do a number on market sentiment. His first press conference turned out bearish for the dollar so this might renew some demand for bitcoin during these times of uncertainty, but analysts predict that the overall market reaction could be similar to the post-election rally.

Either way, additional volatility is expected prior to the actual even as profit-taking could ensue. Dollar price action could spike around during the actual inauguration before the markets establish a clearer direction, which might not be evident until the start of trading in the following week. Apart from that, other global uncertainties could shore up demand for the cryptocurrency but the ongoing changes in the bitcoin arena in China still carry more weight in terms of volumes and outlook.