BTCUSD remains under downside pressure, breaking below a short-term consolidation pattern visible on the 15-minute time frame. Price has dropped to the $892 level before pulling up.

Applying the Fib tool on the latest swing high and low shows that the 61.8% Fib is closest to the broken support of consolidation around the $915 level. The 100 SMA is below the 200 SMA so the path of least resistance is to the downside. This means that the selloff is likely to resume at some point.

A larger gap between the 100 SMA and 200 SMA could signal that bearish pressure is getting stronger. These moving averages could also hold as dynamic inflection points and keep further gains in check. Once bears take over, bitcoin price could head back to the swing low or lower. 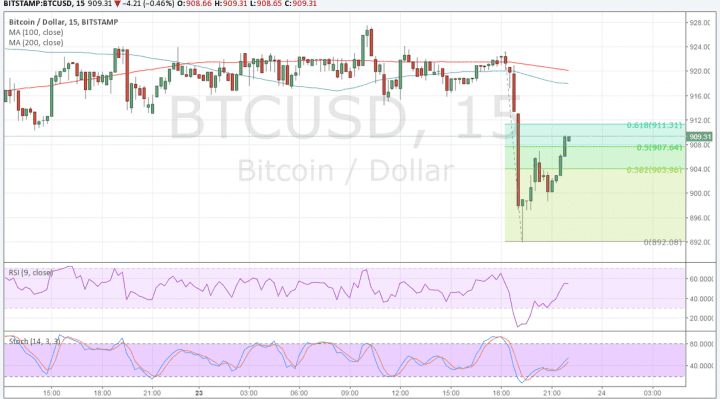 RSI is still heading up for now, which means that there is some buying pressure left. This could spark a larger correction to the next Fib levels, with the line in the sand at the 200 SMA. A move past that point could put bitcoin back up on a longer-term climb.

Stochastic is also pointing north to show that buyers are trying to regain control of price action. Once these oscillators reach the overbought regions, sellers could take over while buyers book profits. On the longer-term charts, it can be seen that bitcoin is having trouble breaking past the area of interest around $900-950, as reversal candlesticks have formed.

Investors continue to be wary of potential regulation from Chinese authorities who are still investigating bitcoin exchanges and clients. A few trading platforms have decided to cease offering margin accounts on bitcoin as they admitted that leverage magnifies the risks and volatility involved in bitcoin trading.

Meanwhile, traders are also playing it safe with Trump’s first few days in office. He has already sparked speculations of a potential trade war so investors might need to put money in safe-haven assets if that happens. His Treasury Secretary nominee has also reiterated his plans to look into China’s currency manipulation activity and any action could significantly impact investors’ behavior in the mainland.

In terms of BTCUSD, the focus could shift to the US advanced GDP release later on in the week as this could provide some clues on the pace and timing of the Fed’s interest rate hikes. A few Fed officials have spoken about the upside risks from increased fiscal stimulus, leading to expectations of more tightening measures throughout the year.

Still, the spotlight is likely to stay on Trump for the rest of the week, although there is a tug-o-war going on when it comes to the factors driving bitcoin. On the one hand, Chinese regulation concerns are dampening gains while the increased global economic uncertainty is keeping a lid on losses. With that, further consolidation is to be expected unless one of these factors takes the upper hand.