Bitcoin price has recently broken below a rising wedge formation, indicating that bearish pressure is picking up. Indeed, sellers are gaining traction as price has made headway south and could carry on with its slide until the next support areas.

The 100 SMA is below the longer-term 200 SMA on the 4-hour time frame so the path of least resistance is to the downside. This could be enough to take bitcoin down to the wedge lows around $760 or lower. Price is closing in on the 100 SMA dynamic inflection point, which could spur a bit of a bounce on profit-taking.

In that case, BTCUSD could still pull back to the broken wedge support around $940 or at least until the nearby 200 SMA before heading lower. RSI is pointing up to show that sellers are taking a break and letting buyers take over for the time being. Stochastic is still moving down so bitcoin could follow suit. Once the oscillator reaches the oversold area and turns higher, buyers could regain control. 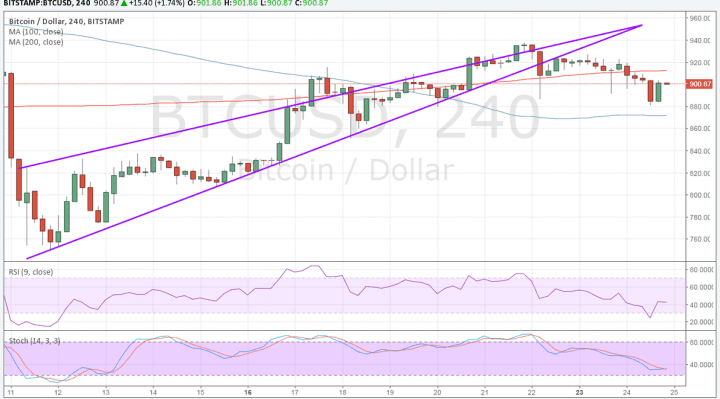 Bitcoin gains are still being limited due to the ongoing crackdown by the Chinese government on exchanges and clients in the mainland. The central bank recently conducted inspections and reportedly found violations, prompting a few exchanges to announce higher fees on bitcoin trading in order to stay in businesses. This follows announcements from the top trading platforms in the country about ceasing to offer margin accounts on bitcoin as this exacerbates the risks involved.

Investors continue to remain wary of additional restrictions, either from authorities themselves or by the exchanges. Liquidity has tanked and taken its toll on volatility, keeping bitcoin stuck in consolidation for the time being. Meanwhile, demand for the dollar has resurfaced as the new U.S. President seems to be settling well in office.

To top it off, Trump’s first few executive orders have been in line with his plans to bring jobs back to America, leading many to speculate that the combination of his protectionist plans and fiscal stimulus could be very positive for growth. This could keep the Fed on track towards hiking interest rates at least three times this year, keeping the U.S. currency very well supported.

For now, traders could continue to trade with caution, booking profits quickly off their long or short positions. Further sideways action could also be in the cards due to this but the path of least resistance is to the downside in terms of both technicals and fundamentals. Chinese authorities are likely to carry on with their investigation on bitcoin activity, keeping mainland traders on edge for potential penalties.