Bitcoin price recently broke out of its short-term descending channel visible on the 1-hour chart, signaling that buyers are trying to push for more gains. Price has reached the $920 area before showing signs of a correction, and applying the Fib tool on the latest swing high and low shows that the 61.8% retracement level lines up with the broken channel resistance near $895-900.

If that area holds as support, price could be able to resume its climb to the swing high or onto the next ceiling around $950. On the other hand, a move below the Fibs could take BTCUSD back inside the channel to resume its downtrend.

The 100 SMA is crossing below the longer-term 200 SMA to suggest that the path of least resistance is to the downside. In other words, this means that losses are more likely than gains if the crossover is completed. RSI is pointing down to show that sellers are on top of their game while stochastic is also heading south so bitcoin might follow suit. 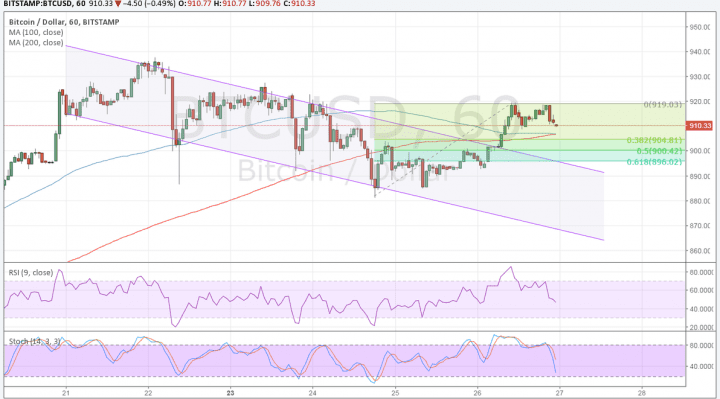 Market events suggest that the path of least resistance is to the downside as well, mostly due to the fact that Chinese authorities continue to crack down on offshore investment and speculative yuan activity. In line with this, they have forced several bitcoin exchanges to implement additional restrictions, charge higher fees, or cease offering margin accounts in order to discourage trading. Officials continue to look into bitcoin activity among investors, keeping them anxious of potential penalties and fees.

Because of that, liquidity has been dragged down and bitcoin continues to trade carefully. This behavior could stay in play for a few more weeks while Chinese officials carry on with their probe. More restrictions could put more downside pressure on BTCUSD and push the cryptocurrency on a steeper slide against its counterparts.

However, a general feeling of unease in the financial markets is also evident and this might be enough to keep bitcoin supported in the near term. The Trump administration’s policies seem to be keeping a lid on the dollar’s gains for the time being and is causing other global markets to stay on their toes, even as US equities keep on advancing. Apart from that, Brexit headlines are also influencing overall market sentiment as uncertainty could prevail if the negotiation process is delayed.

A lot can happen over the weekend and profit-taking activity is usually observed, especially since Chinese markets are closed for the Spring Festival holiday. With that, additional volatility could ensue if traders rush to liquidate positions or to reestablish them before the start of the next trading week, depending of course on how the weekend events turn out. Speeches by Trump could have a strong say on risk sentiment and dollar price action as well.