Bitcoin continues to move in tight consolidation and this might be the norm for now while liquidity in China is weighed down by regulatory checks. On the 4-hour chart, it can be seen that BTCUSD is trading within its area of interest around $900-930 and is testing the dynamic inflection point at the long-term 200 SMA.

The 100 SMA is below the 200 SMA on this chart so the path of least resistance is to the downside. However, the gap is narrowing, which means that a crossover could take place and draw bullish momentum. In that case, an upside breakout could take bitcoin up to the next resistance around $1000 then onto the $1120 highs.

However, stochastic is already in the overbought region so buyers might need to take it easy and let sellers take the wheel. RSI is also turning lower so BTCUSD might follow suit. In this case, price could break below $900 and move to the next area of interest at $800 then onto the lows at $700. 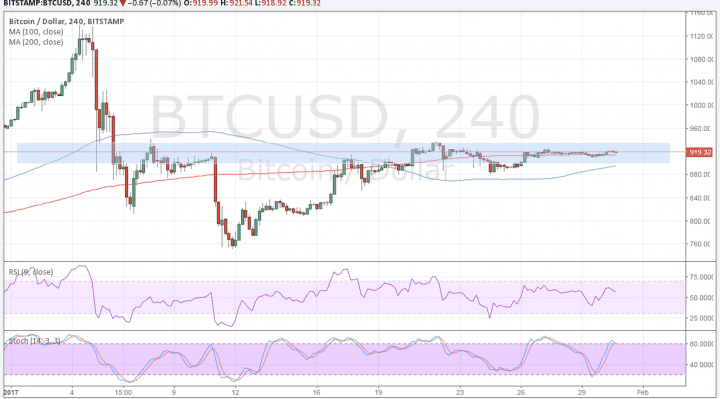 In terms of market sentiment, the path of least resistance is also to the downside as the reduction of bitcoin trading activity in China has led many to book profits off their earlier long positions. This is also discouraging traders from taking on new long trades. Even though a number of trading platforms already introduced restrictions on account offerings and imposed higher transactions costs, authorities continue to investigate exchanges and clients in hopes of further curbing offshore investment and speculative activity.

Additional restrictions could wind up pulling the rug from under BTCUSD’s feet and triggering another wave lower for the cryptocurrency. Keep in mind that China is the largest bitcoin market in the world so any changes in this area could have massive repercussions on price action. Chinese PMI data is due later on this week and strong figures could boost local stock holdings, encouraging traders to move their funds away from bitcoin and onto Chinese shares.

On the flip side, the US dollar is also on edge with the Trump administration so traders might look to the next major events for direction. The FOMC is scheduled to make its monetary policy announcement soon and hawkish hints could lead to another boost for the US dollar. Most of the voting members have signaled at least two hikes this year while giving some leeway for fiscal policy changes under Trump’s leadership.

Any indication that the recent government moves would set the tone for faster tightening could mean more gains for the dollar while a stronger than expected NFP reading could underscore this hawkish bias. On the other hand, words of caution from the Fed could lead to more dollar unwinding, along with a potential NFP miss. Either way, these events might be the main source of volatility for BTCUSD in the coming days while Chinese investors sit on their hands.