Bitcoin just broke below the support of its symmetrical triangle formation visible on the 4-hour time frame. This means that sellers are regaining control of price action from here, possibly pushing it down by $800 or the same height as the triangle pattern.

The 100 SMA just recently crossed below the longer-term 200 SMA to signal that the path of least resistance is to the downside. Also, the 100 SMA lines up with the triangle resistance to add to its strength as a ceiling in the event of a pullback. The 200 SMA adds a line of defense around the $2600 mark as well.

Stochastic is heading down and is closing in on the oversold region to suggest that profit-taking might happen soon. RSI is also indicating oversold conditions so sellers might need to take a break from here, allowing a pullback to nearby resistance areas to happen. 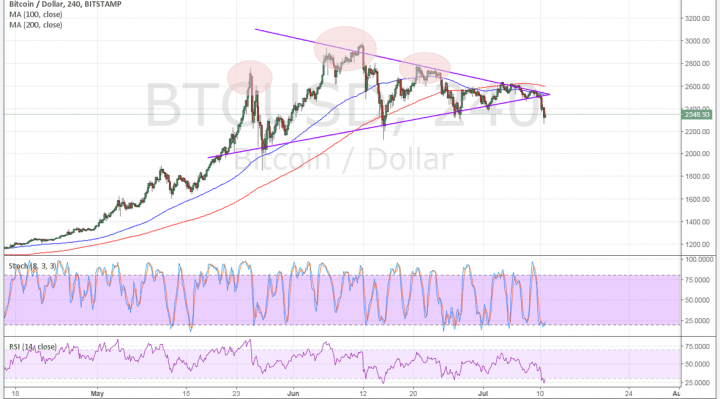 Bitcoin has taken a hit on renewed concerns about a hard fork, which involves splitting the code used to handle transactions and possibly leading to inconsistencies across the network. This has led investors to liquidate their holdings on the lack of positive updates from the industry as well.

At the same time, the return in risk appetite has led traders to put money back in stocks and commodities to join in the rallies. Bitcoin typically gains during times of risk aversion when investors look for alternative holdings that offer high returns outside of traditional markets.

Also, the dollar has gotten a boost from stronger than expected NFP numbers released last Friday. This buoyed Fed rate hike expectations for either September or December even as the central bank is also slated to kick off its balance sheet reinvestment operations around the same time.

The next big catalyst for the dollar is Fed head Yellen’s testimony during which she is expected to highlight the improvements in the labor market. Of course cautious remarks could still be in the cards and this might allow bitcoin price to recover versus the dollar. If the rallies are barely sustained, bears could take this as a sign to short at better prices.