Bitcoin recently surged past its descending channel resistance to climb close to its record highs before pulling back. Applying the Fib tool on the latest swing low and high reveals that the 50% retracement level already held as support and that bullish momentum might be returning.

If so, bitcoin could be on track towards testing its all-time highs past $2900 once more and even making its way to new ones. A break past the $3000 major psychological barrier could be enough to seal in more gains and draw more bulls in.

The 100 SMA is below the longer-term 200 SMA to show that the path of least resistance is to the downside. However, the gap is narrowing to signal that an upward crossover might be underway. These moving averages are also close to the 50% Fib, adding to its strength as a floor in the event of another dip while the 61.8% retracement level is close to the broken channel resistance. 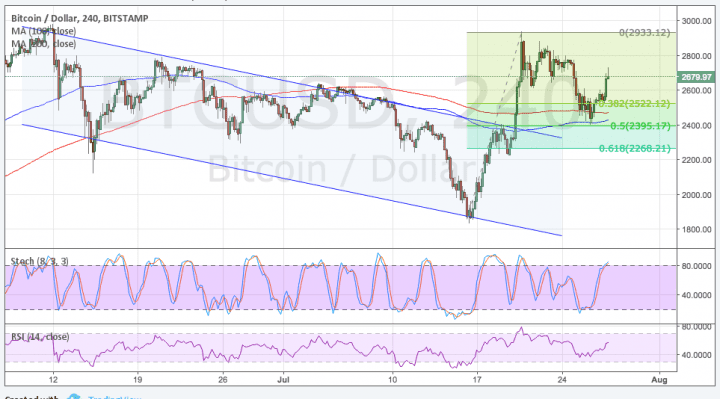 Stochastic is climbing so bitcoin might follow suit but the oscillator is also approaching overbought levels. When it turns lower, sellers could return and spur profit-taking. RSI has more room to climb so there may still be a significant amount of buying pressure left.

The US dollar has been pushed and pulled by several market factors over the past week, including FOMC statement that signaled a more cautious stance. The Fed altered its assessment of inflation so rate hike enthusiasts are a bit worried as policymakers also refrained from providing a timeline on when the balance sheet runoff might begin.

As for bitcoin, the cryptocurrency shrugged off remarks from capital manager Howard Marks who said that bitcoin is a pyramid scheme and has grown in value only due to millennials. Traders are more focused on the August 1 shift to SegWit that might determine whether hard fork troubles could come into play or not. A smooth transition could be the catalyst it needs to break past the $3000 barrier and go for new record highs.