After making a test of support, bitcoin has bounced up to the channel resistance as predicted in the previous article. Bitcoin is now testing the resistance around $2450 and might be due for another move back to the bottom at $2250-2300.

The 100 SMA is below the longer-term 200 SMA so the path of least resistance is to the downside. In other words, a bounce off the resistance is more likely to happen than an upside breakout. Also, the moving averages are close to the bottom of the channel, which could reinforce its role as support.

Stochastic is already indicating overbought conditions, which means that bullish momentum could fade soon. Once the oscillator turns down, selling pressure could return and lead to a quick selloff. Stronger bearish momentum could spur a break below the short-term channel bottom and trigger a longer-term selloff.

RSI is still on the move up to indicate that there is still a bit of bullish pressure left. However, this oscillator is also closing in on the overbought zone as buyers are getting exhausted and might be willing to let sellers take over. 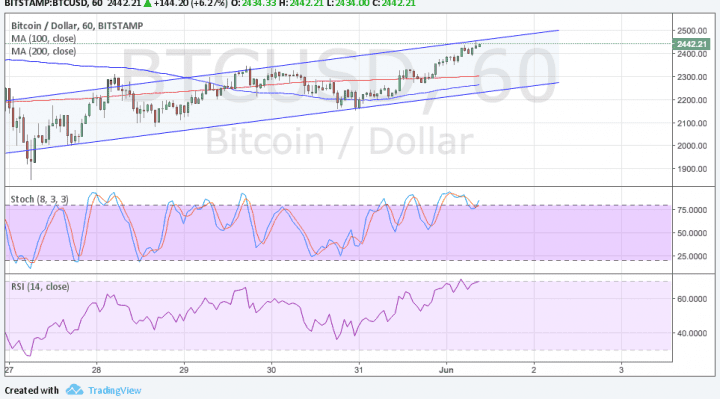 Bitcoin got a fresh boost on news that one of China’s biggest exchanges is allowing withdrawals for clients again. Recall that top bitcoin firms in the country were slapped with several restrictions earlier this year as monetary authorities stepped up their crackdown of bitcoin activity. This led to speculations that cryptocurrency trading might be banned altogether in China but bitcoin eventually edged back up when the spotlight turned to other updates.

This could mark the start of a revival in bitcoin trading volumes in China, which has accounted for majority of transactions in the market in the past. This could be in pace with surging volumes in Japan, following the government’s decision to officially recognize bitcoin as a legal form of payment. This also eases concerns that bitcoin firms in China will be forced to shutdown and that investors can put their money in alternative assets, especially since leading indicators are hinting at a slowdown in the world’s second largest economy.