Bitcoin plunged sharply after completing and breaking below the head and shoulders pattern visible on its short-term time frames. Price is now testing the long-term rising trend line support connecting the lows since May 24.

A bounce off this trend line could keep the uptrend intact and allow BTCUSD to recover to the $3000 area or at least until the area of interest at $2750. Stronger buying pressure could lead to the creation of new all-time highs.

The 100 SMA is above the longer-term 200 SMA so the path of least resistance is still to the upside. The gap seems pretty wide enough so bullish pressure could persist and a downward crossover might not happen anytime soon. However, it’s also worth noting that bitcoin has broken below both moving averages to signal that sellers have the upper hand. 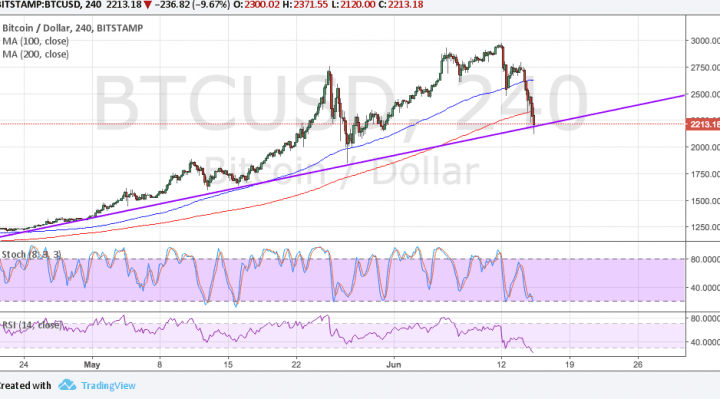 Stochastic is still on the move down so there’s some bearish pressure left to trigger more losses. A break below the $2200 handle and trend line support could be enough to confirm that further losses are in the cards.

RSI is also heading lower so bitcoin could follow suit. Both oscillators are closing in on the oversold levels already so bears might want to book profits soon and allow bulls to take over.

Dollar strength picked up after the FOMC statement as the Fed hiked rates as expected and confirmed that they’re still looking to hike one more time before the end of the year. This doused dovish expectations even after the Fed shared more details on its balance sheet unwinding plans, which could also be seen as a form of monetary tightening.

As for bitcoin, cyberattacks on a couple of major exchanges led to outages that they claimed were due to high traffic and an unprecedented level of trading activity. This led market watchers to question the security of the cryptocurrency and the network, closing out some of their positions as uncertainties remain.