Bitcoin price has been sliding lower but it is approaching potential support at an area of interest visible on the short-term time frames. This former resistance level lines up with the ascending channel support and the 50% Fibonacci retracement level.

The 100 SMA is above the longer-term 200 SMA on this time frame so the path of least resistance is to the upside. In other words, the uptrend is more likely to resume at some point than to reverse. A larger correction from the climb could still draw support from the 61.8% Fibonacci retracement level just slightly below $2600.

Stochastic is heading down but is already dipping into the oversold region to suggest that sellers are running out of steam. RSI still has some room to head lower so there may be some selling pressure left. Once both oscillators hit oversold levels and turn higher, buying pressure could return and lead to a move up to the swing high near $2800 or to the channel resistance. 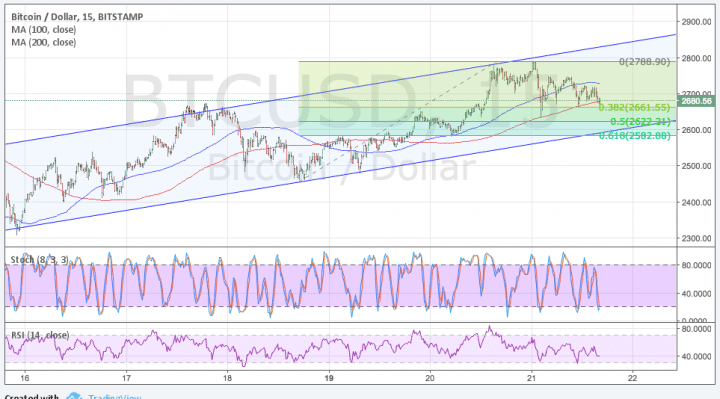 Dollar demand has picked up recently on risk-off flows, owing mostly to the drop in equities and commodities in recent trading sessions. However, a couple of Fed policymakers doused hopes of a September hike in hinting that they could start balance sheet unwinding that month instead.

There’s not much in the way of top-tier US data until the end of the week so traders could focus on Fed rate hike prospects or overall market sentiment in determining dollar direction. As for bitcoin, news that India has formed a committee to explore virtual currencies has sparked speculations of regulation.

Investors and bitcoin startup owners are hopeful that this could shore up the cryptocurrency’s legitimacy, which could mean a big boost in value. Recall that the Japanese government’s acceptance of bitcoin as a legal form of payment led to a sharp rise in trading activity and volumes, giving the cryptocurrency enough momentum to establish one record high after another earlier this year.