Bitcoin has formed lower highs and higher lows, creating a symmetrical triangle formation on its 1-hour time frame. Price is currently testing the resistance and could be due for a move back to support.

The 100 SMA is below the longer-term 200 SMA so the path of least resistance is to the downside. In other words, the resistance is more likely to hold than to break. In addition, the 200 SMA is holding as dynamic resistance as it lines up with the top of the triangle close to the $2600 level.

Stochastic is pointing up, though, to indicate that buyers are regaining control of price action. RSI is also pulling up without even hitting oversold conditions. A break past the triangle resistance could send bitcoin up to the all-time highs near $3000 or by an additional $800, which is the same height as the chart pattern. 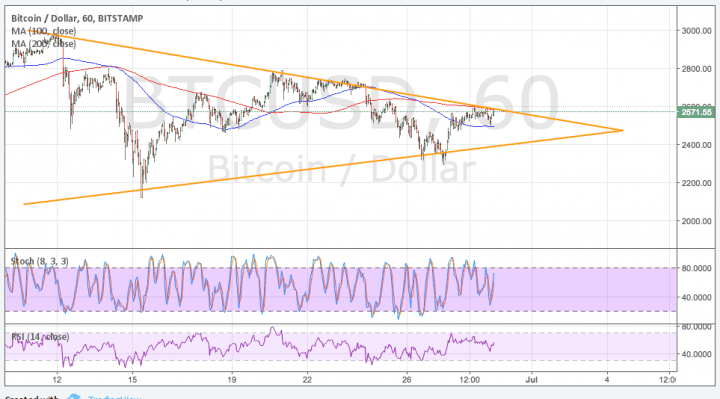 The end of the month and quarter usually inspires profit-taking in financial markets, and this week should be no exception. It also marks the second half of the year and the start of the summer months, which could mean lower liquidity in the next few months. With that, investors would be keen on taking the gains from the previous bitcoin rallies, possibly leading to a sharp drop if massive covering is seen.

Bitcoin has had a pretty good run earlier in the quarter as it gained strong momentum to establish one record high after another. This stems mostly from the Japanese government’s decision to accept bitcoin as a legal form of payment, thereby increasing its legitimacy. From there, trading volumes and activity picked up as speculations about stronger price gains kept it afloat.

Towards the end of this month, though, many worried that the cryptocurrency could be in a bubble as some big name investors warned. The resulting drop was worsened by outages in a couple of top bitcoin exchanges and by the ethereum flash crash.