Bitcoin continues to move inside its rising channel formation to indicate that buyers are in control of price action. Price is testing the channel resistance right now and is closing in on the record highs near $2800.

The 100 SMA is safely above the longer-term 200 SMA on this time frame so the path of least resistance is to the upside. The moving averages are also maintaining a steady gap so bullish momentum could stay in play for some time and there’s a low likelihood of new crossovers forming. Also, the 100 SMA is close to the short-term channel support, adding to its strength as a floor in the event of a pullback.

Stochastic is pointing up to show that there’s bullish pressure in play, but the oscillator is also dipping into overbought territory. This could mean that buyers are starting to feel exhausted and might want to book profits soon. If sellers take over, bitcoin could retreat to the channel support at $2400.

RSI is cruising sideways but also near the overbought zone to show a bit of rally exhaustion. A stronger return in selling pressure could spur a break of the channel support and a test of the next floor around $2000 or the 200 SMA dynamic support. 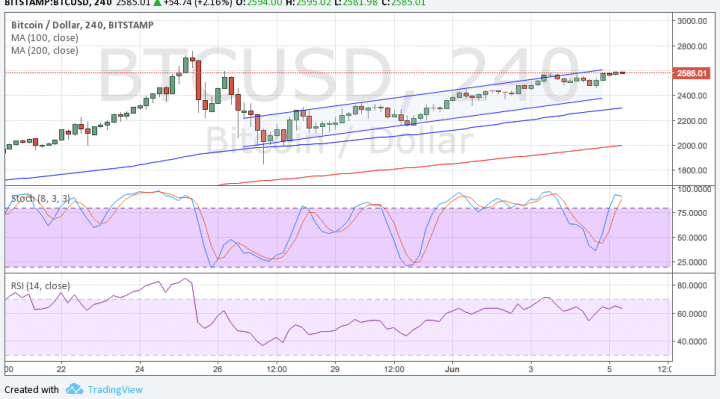 The presence of geopolitical risk, particularly in the United Kingdom where elections are set to take place and where another batch of terror attacks happened, is keeping bitcoin afloat. After all, traders tend to look for higher returns in alternative assets like digital currencies while diversifying funds away from traditional markets like stocks or currencies during these scenarios.

Apart from that, the ongoing spat in the Middle East as Saudi Arabia cut diplomatic ties with Qatar for supporting Iran’s war efforts is also adding more uncertainty to the mix. Tensions in the region could make it more difficult for the OPEC to implement its output deal, which could be negative for oil and other commodities. To top it off, it could bring more risk-off flows which tend to be positive for bitcoin.