Bitcoin is still trading inside its ascending channel formation and appears to be attempting to break above the resistance. If this carries on, bitcoin could test its record highs closer to the $2800 mark.

Profit-taking could ensue at this point, especially since stochastic is already indicating overbought conditions. This basically means that buyers are feeling exhausted and might allow sellers to take over. If that happens, BTCUSD could fall back inside its channel and test support at $2400.

The 100 SMA is above the longer-term 200 SMA, though, so the path of least resistance is still to the upside. In addition, the short-term SMA is close to the bottom of the ascending channel, adding a potential floor in the event of a correction from the climb.

RSI is still pointing up to show that there’s some bullish pressure left in the mix. This could be enough to trigger a break past the all-time highs and the creation of new ones closer to the $3000 mark. However, this oscillator is also nearing the overbought area to suggest potential rally exhaustion. 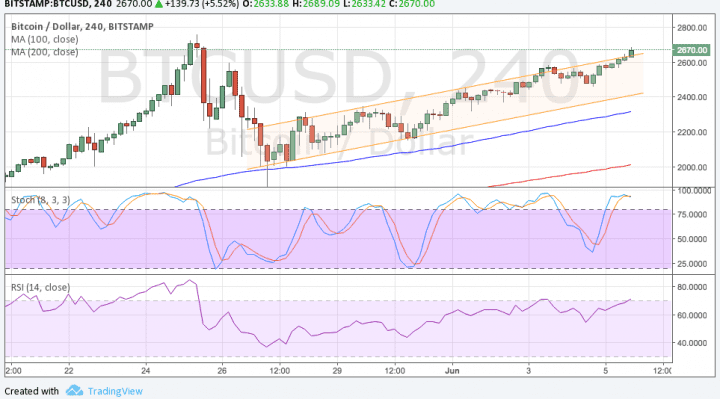 Market factors are still very much in support of more bitcoin gains, though. Just recently, news broke out that a top exchange in China has resumed withdrawals for clients, easing fears of a government ban on the cryptocurrency. This has led to a fresh new wave of funds from Chinese investors, particularly those that liquidated their positions when money laundering crackdown efforts kicked into high gear a few months back.

Apart from that, economic reports in China have been hinting at a potential slowdown. This could weigh on stock market gains, leaving investors on the hunt for higher returns in alternative markets like cryptocurrencies. The scalability agreement, which has reportedly gained support of at least 83% of miners, is also promising in terms of easing “hard fork” issues.

From a more global perspective, geopolitical risks are also keeping traders on edge and hesitant to put money in traditional markets like stocks and commodities. The upcoming testimony of former FBI head Comey this week could also put some weight on the dollar as well.