BTCUSD has been trending higher recently but is consolidating below its recent highs. Applying the Fib tool on the latest swing low and high on the 1-hour chart shows that the 50% level lines up with the rising support area and is close to $2700.

Price already seems to have bounced off the 38.2% level, though, and may be ready to resume its climb as soon as more bulls join in. Price has formed higher lows and lower highs, signaling that traders are still holding out for the next market catalysts.

The 100 SMA is above the longer-term 200 SMA on this time frame so the path of least resistance is to the upside. In addition, the 100 SMA lines up with the trend line and the Fib levels. A larger correction could last until the 61.8% Fib closer to $2600, which is also an area of interest. 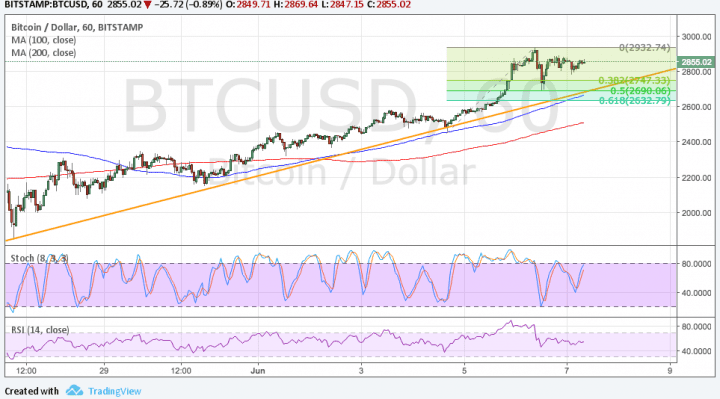 Stochastic is pointing up to suggest that there’s still some buying pressure in play. However, this oscillator is already nearing the overbought zone to indicate rally exhaustion. Once it turns lower, selling pressure could return and spur a break of the uptrend. In that case, bitcoin could move down to the 200 SMA dynamic support next.

RSI is treading sideways to reflect price consolidation. It seems to be on its way down so there’s some bearish momentum left for either a larger correction or a selloff. However, if bulls keep putting up a fight, bitcoin could be on track towards breaking past its recent highs and aiming for the $3000 mark.

A tweet by Mark Cuban is partly being blamed for the recent drop in bitcoin price as the investor said that the cryptocurrency is in a bubble. He also mentioned that it is more of a religion than an asset. However, digital currencies continue to rake in gains as geopolitical risks remain in play.

For one, there’s the rift in the Middle East after Saudi Arabia and a number of other Gulf states cut diplomatic ties with Qatar for supporting the war in Iran. Apart from that, traders appear to be uneasy ahead of Comey’s testimony on Thursday.