Bitcoin price continues to trend higher and has just bounced off the rising trend line connecting the lows since the last few days of May. This is around the 61.8% Fibonacci retracement level and the $2600 major psychological support.

Tweezer bottoms can be seen, signaling that buyers are reganing control of bitcoin price action. In this case, bitcoin can make its way back up to the swing high at $2932.75 or create new all-time highs closer to $3000.

The 100 SMA is above the longer-term 200 SMA so the path of least resistance is to the upside. In addition, the gap between the moving averages is widening to reflect stronger buying pressure. A larger correction could still draw support around these dynamic inflection points at $2400 and $2000, but a break below these could confirm a reversal.

Stochastic hasn’t quite reached the oversold area but it is already pulling back up to reflect a return in buying pressure. RSI, on the other hand, is still pointing down to show that sellers still have some energy left to push bitcoin lower. 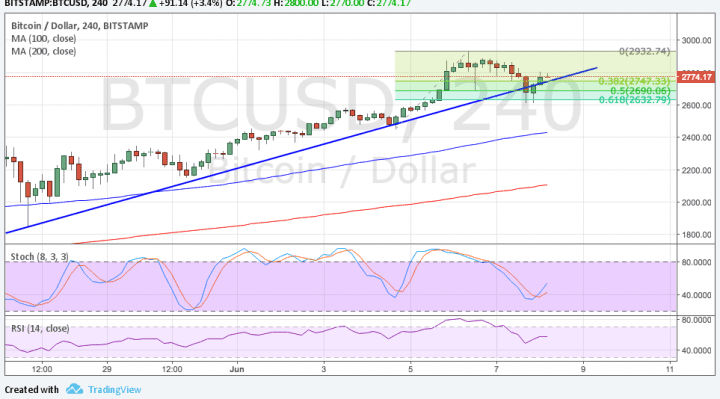 Traders are on edge this so-called “Super Thursday” as it is the day of Comey’s testimony in Senate, during which he is expected to shed more light on whether or not Trump has committed an impeachable offense in sharing highly-classified information to Russian officials. If so, it could mean more dollar weakness as traders price in lower odds of seeing fiscal policy changes anytime soon.

In another part of the world, the elections are set to begin in the United Kingdom and market watchers are eager to find out if the Conservatives can achieve majority. If so, this would mean political stability and a stronger negotiating front during Brexit talks. On the other hand, a hung parliament could make it more difficult for PM May to enact any changes or to get any proposals through.

A pickup in risk aversion could be bullish for bitcoin, as traders generally look for higher returns in alternative markets during these scenarios. On the other hand, a return in risk-taking could lead to a selloff.