Bitcoin previously consolidated inside a symmetrical triangle formation then broke to the upside, signaling that buyers are regaining control. The triangle spans $2560 to $2920 so the resulting climb could be of the same size.

A bullish flag has formed after the breakout and this is typically considered a continuation signal. A break past the latest highs at $2840 could be enough to confirm that more buyers are joining the game. On the other hand, a break below the lows around $2800 could spur a pullback to the broken triangle resistance or the 100 SMA.

The 100 SMA is above the longer-term 200 SMA so the path of least resistance is to the upside. The moving averages have maintained their gap, indicating steady bullish pressure.

Stochastic is turning higher without even reaching oversold levels, indicating that buyers are eager to push bitcoin back up. RSI is treading sideways so there could be more consolidation underway. 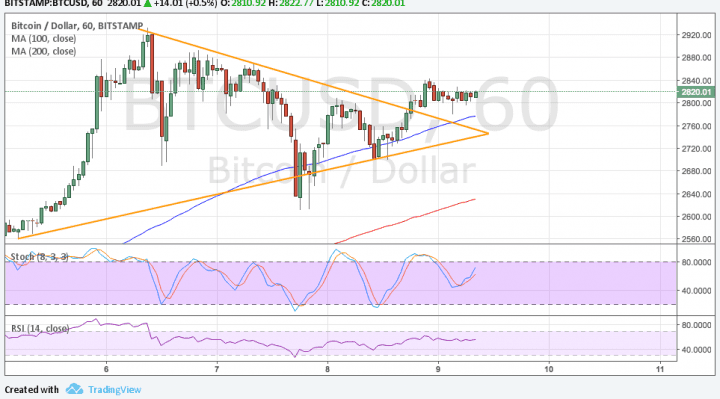 Risk aversion seems to be returning in the financial markets as the snap elections in the UK failed to generate a majority for the Conservatives. This leaves the UK with a hung parliament, which could make it more difficult to pass reforms and to have a united front in Brexit negotiations.

With that, European traders are starting to move funds to bitcoin and other cryptocurrencies in anticipation of tougher times ahead for the region. Still, the US dollar could be able to put up a good fight against bitcoin as former FBI head Comey’s testimony didn’t exactly turn out to be a smoking gun for the Trump administration.

Moving forward, traders could focus on the goings-on in the UK to see how PM May would maneuver through the current political uncertainty. Elsewhere, the rift in the Middle East persists and could keep traders on edge, which is usually positive for bitcoin.

There is some downside pressure, though, as bitcoin experts have recently told Congress that offshore exchanges still open the possibility of cybercrime involving the cryptocurrency. This hearing comes after a string of ransomware attacks demanded bitcoin as payment.