Bitcoin has barely been able to make any headway in either direction these days as it is still stuck inside a symmetrical triangle pattern. Price is at the peak of the formation, though, so a breakout is bound to happen soon. An upside breakout could signal that longer-term gains are in the cards while a downside break would signal a downtrend.

The 100 SMA is above the longer-term 200 SMA on the 1-hour time frame so the path of least resistance is to the upside. In addition, the 100 SMA is close to the triangle support, adding to its strength as a floor. A drop below this level could take BTCUSD to the 200 SMA dynamic support next. The gap between the moving averages seems to be narrowing so a downward crossover to indicate a pickup in selling pressure is also possible.

RSI is heading lower so bitcoin could follow suit. Stochastic is also turning lower, which reflects that bears are in control of bitcoin price. Stronger selling pressure could lead to a break below the moving average dynamic inflection points and a test of the key support at $1000. On the other hand, a candle closing past the $1200 area could lead to a climb to the next key level at $1220 then $1250. 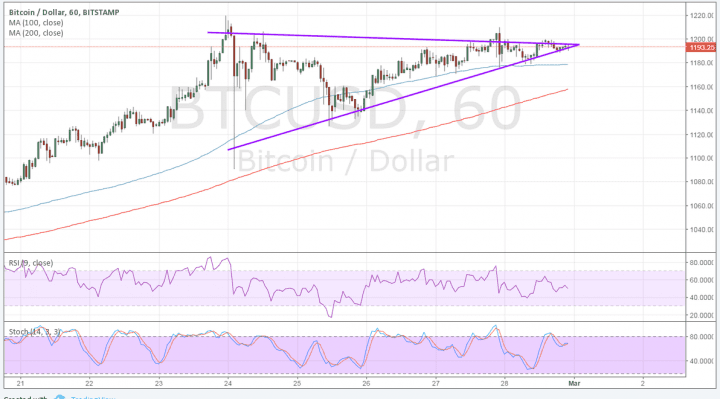 BTCUSD is being pushed and pulled by opposing forces at the moment as the dollar is drawing support from the Trump administration’s fiscal stimulus plans and expectations of a Fed rate hike in March. On the other hand, bitcoin is also getting a boost from expectations of the COIN bitcoin ETF approval by the SEC this month. If it pushes through, bitcoin could eventually gain the upper hand as having an ETF would make the cryptocurrency more accessible to investors and therefore significantly increase liquidity.

On the other hand, if the SEC still denies the application and gives more requirements for the Winklevoss brothers to fulfill, bitcoin could stand to lose some ground to the dollar. So far FOMC members have been reiterating the need to hike rates sooner rather than later, with many projecting that three interest rate hikes are in the cards for this year.

In the meantime, there have been no major announcements from China and the recent pickup in manufacturing PMI readings suggests that authorities won’t be too concerned about yuan speculative activity or offshore investments as they used to. Still, investors seem to be on edge that regulations or penalties could be announced soon, hesitating to take bitcoin price any higher from here.

The focus is still on geopolitical risks all over the globe, particularly in the European region, although odds of a Frexit seem to have subsided. In any case, a pickup in risk aversion could benefit bitcoin if investors keep looking for alternative ways to catch returns.