Bitcoin is testing support at the rising channel visible on the 4-hour chart and appears to be bouncing off support already. If this carries on, bitcoin could make its way back up to the channel resistance at the $1300 mark.

Price is also around the 100 SMA dynamic support, which adds to its strength as a floor. Still, a larger pullback could find support at the 200 SMA close to the $1100 area of interest. Stochastic is turning higher to indicate a pickup in buying pressure. RSI is also moving up so bitcoin price could follow suit. 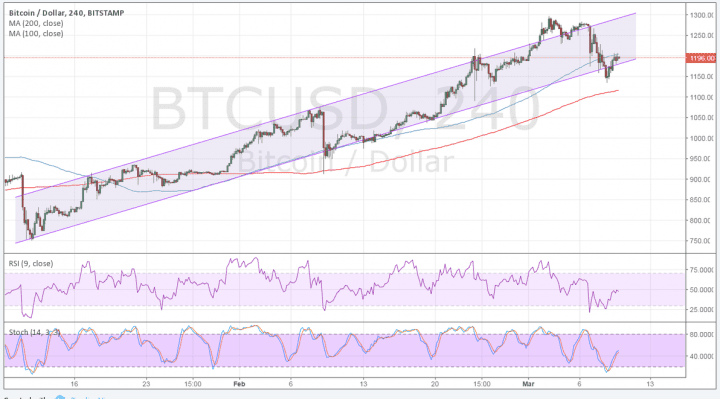 The main event risk for bitcoin is the SEC announcement on the COIN bitcoin ETF approval, which is expected to happen in today’s New York session. If they give the green light for the ETF, it could mean a lot of upside for the cryptocurrency since it would boost market liquidity and interest. On the other hand, denying the request could lead to a channel breakdown for BTCUSD.

As for the dollar, the event risk is the NFP release. Analysts are projecting a 188K increase and a larger than expected gain could mean much stronger odds of a Fed interest rate hike next week, which would be very bullish for the dollar. On the other hand, downbeat results could cast doubts on tightening and force the dollar to retreat. Leading indicators have been mixed with ISM surveys showing a potential dip in hiring and the ADP non-farm employment change showing a much higher than expected increase of 298K.

Zooming in to short-term time frames shows some triangle consolidation going on so a straddle setup could work to catch any big moves if a breakout happens. However, this is usually a very volatile asset so fakeouts are possible and it may be more prudent to wait for the initial move to fade then catching the general direction later on.

On the longer-term charts, it can be seen that there are several uptrend lines holding so a bounce off those levels could be enough to draw more buyers in and allow the uptrend to gain stronger traction. There have been no major regulatory announcements from Chinese officials recently so investors no longer seem to be as concerned about potential penalties or restrictions as they used to.

Still, it’s worth noting that a Chinese central bank official recently remarked that bitcoin needs closer supervision so there’s still a chance that they could come up with a regulatory framework, possibly dampening liquidity in the country.