Bitcoin experienced a pickup in volatility on Friday, spurred by the SEC announcement and the US NFP release. Positioning ahead of the SEC decision on the Winklevoss twins’ bitcoin ETF application drove prices up to the channel resistance past the $1300 mark but it sold off sharply when the agency denied their request.

As it turns out, the SEC ruled that the proposal is  inconsistent with sections of the Exchange Act, particularly Section 6(b)(5) which requires any national securities exchange rules to protect investors from fraudulent or manipulative acts. Since most of bitcoin is traded in other countries, the American regulator would find it difficult to have strong oversight on market activity. Also, the SEC mentioned that markets that trade in bitcoin are largely unregulated, which opens it up for fraud and manipulation.

Still, Tyler and Cameron Winklevoss vowed to continue with their pursuit for COIN ETF approval, which would significantly increase market liquidity by making the cryptocurrency accessible to more individual and institutional investors. The twins have been ngaged with regulators for years and continued to tweak their proposal in their effort to bring bitcoin to the mainstream.

Aside from that, dollar demand spiked after the NFP report printed a stronger than expected gain in hiring versus the previous figure, which also enjoyed a sizeable upgrade. This seals the deal for a Fed interest rate hike this week and possibly some upgrades in economic forecasts. In that case, the US central bank could stay on track towards tightening three times this year, especially if their economic agenda is supported by the Trump administration’s fiscal reform plans. 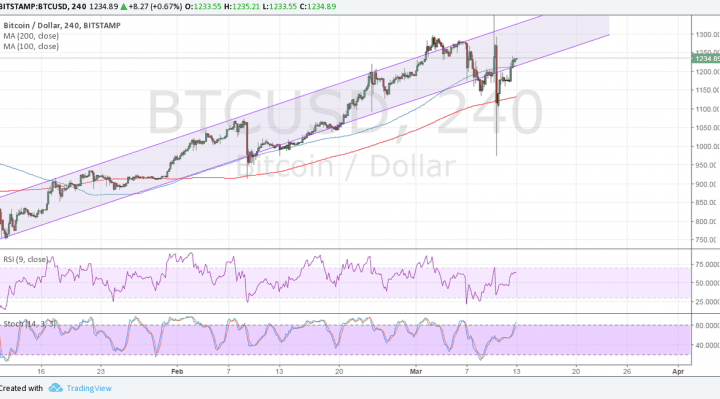 However, traders might also decide to book profits on the actual Fed announcement, leading to a dip in the dollar that bitcoin might take advantage of. The 100 SMA is above the longer-term 200 SMA on the 4-hour time frame, confirming that the path of least resistance is to the upside, and the gap is widening to confirm stronger bullish momentum.

Also, RSI is on the move up to suggest that bulls are in control of BTCUSD price action. Stochastic is also heading north so bitcoin could follow suit, possibly making its way up to the channel resistance at $1300 and beyond. The 100 SMA lines up with the bottom of the rising channel, adding to its strength as a floor, while the 200 SMA recently held as a dynamic inflection point and could continue to do so.

The main event risk for the week is the FOMC announcement, which promises volatility for BTCUSD once more. If policymakers sound very hawkish and leaning towards two more hikes this year, the dollar could eventually outlast bitcoin and lead to a reversal from the recent climb. On the other hand, cautious remarks could lead bulls to book gains.