Bitcoin is moving inside an ascending channel on its 15-minute time frame and is currently testing support. A bounce off this area could take it back up to the channel resistance at the $1270 area and beyond.

The 100 SMA is above the longer-term 200 SMA on this time frame so the path of least resistance is to the upside. Also, the 200 SMA lines up with the bottom of the channel, adding to its strength as a floor. However, the gap between the moving averages is narrowing so a downward crossover could be imminent. In that case, sellers could regain the upper hand and push for a channel breakdown.

RSI is moving up to show that buyers are in control of price action, likely enough to take bitcoin up to the channel resistance. Stochastic is also heading north so BTCUSD might follow suit, but this oscillator is already nearing the overbought zone. Once it turns lower, sellers could gain energy and spur a reversal from the uptrend. 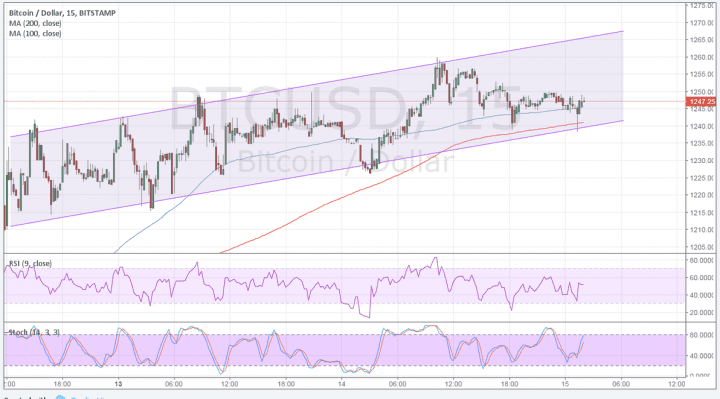 Dollar traders are waiting for the FOMC statement in today’s New York trading session as the US central bank is widely expected to hike interest rates. The Fed will also print its updated growth and inflation forecasts and positive revisions could remind traders that more rate hikes are in the cards for the year. In particular, analysts are pricing in odds for a June hike at 60% and for a September hike at 80%.

Apart from that, the accompanying press conference by Fed Chairperson Yellen could also provide some clues on what the Fed has in mind for the rest of the year. While they did express caution regarding the Trump administration and its uncertainties earlier on in the year, it seems that their economic agenda and fiscal policy reform plans could be aligned. If policymakers sound even more confident about US economic prospects this time around, BTCUSD could be poised for a break lower.

Keep in mind that bitcoin is still licking its wounds after the SEC’s rejection of the COIN ETF late last week. This held the potential to bring bitcoin to mainstream markets and boost overall liquidity, but the regulator said that there’s just too much risk involved in using cryptocurrency for investment purposes because it is largely unregulated in other markets and has a high incidence for fraud.

Although the Winklevoss twins noted that they would continue to work with the regulator to bring this idea to fruition, traders are now turning their attention to other factors influencing bitcoin. In China, the PBOC recently had a few remarks on the cryptocurrency and an official was quoted saying that bitcoin exchanges need stricter supervision so traders are understandably on edge.