Bitcoin is still on a solid uptrend on its longer-term time frames, moving safely above a long-term trend line since October 2015 and a steeper trend line since mid-2016. Price has just bounced off support recently and might be making its way up to the record highs just above $1300.

The 100 SMA is above the longer-term 200 SMA on this time frame so the path of least resistance is to the upside. In addition, the gap between the moving averages is widening to show stronger bullish pressure. The 100 SMA also lines up with the trend line, adding to its strength as a floor.

Stochastic is on the move up to confirm that buyers are in control of price action at the moment. This bullish pressure could be enough to bring BTCUSD back up to $1300 or at least keep it supported above the $1100 near-term support. However, RSI is on the move down so there may be some selling pressure left.

In that case, bitcoin could still pull back for another test of the near-term trend line support around $1000, which is a strong psychological level. A break below this area could lead bitcoin to the next dynamic support at $800 near the 200 SMA. An even larger correction from the recent climb could draw support at $700 or the longer-term rising trend line. 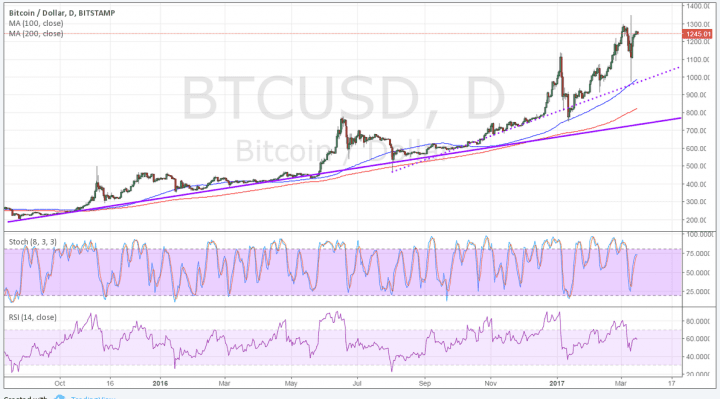 There are a number of factors pushing and pulling bitcoin price these days. For one, there’s the recent Fed interest rate hike and the promise to keep up its pace to three rate hikes this year that’s drawing demand for US assets and the dollar. Apart from that, risk aversion has favored the safe-haven dollar as well and a potential pickup in bond yields and US equities could also be in its favor.

However, bitcoin also usually draws support from times of risk aversion. Back when the Greek debt crisis resurfaced in mid-2015, the cryptocurrency surged on stronger demand when the nation underwent capital controls. Greeks had to look for alternative ways to continue their daily spending and search for alternative investments while other Europeans also put some funds in bitcoin for safety in case the shared currency ceases to exist.

This time around, political uncertainties are still very much present in Europe, albeit in different forms. For one, there’s the upcoming elections in the Netherlands that’s being influenced by anti-European sentiment. Next up, we’ve got a returning lead by pro-Frexit Le Pen and Fillon’s formal investigation for allegedly diverting public funds isn’t helping his chances of winning. Rising Euroscepticism in the region could revive fears of a region breakup, to add to the already-present risks from the Brexit and the potential Scottish referendum.

On the other hand, a factor that’s been keeping bitcoin gains in check is the regulatory situation in China, as authorities are pushing for tighter controls and supervision on exchanges. This sentiment has been echoed by the SEC in their denial of the COIN bitcoin ETF last week, reminding traders of the incidence of fraud and manipulation in the bitcoin market.